2012 Classic Champions Report: How Garnier and Lafleur Won it. PART 2

This is the continuation of the 2012 CSFL Classic.


Day 2
Horrific wind, rain and lighting greeted the anglers at dawn. After weather delayed the launch, Rob and Pete bee lined it to their best spot.  Surprisingly the bait remained locked on the spot and no competition boats from Friday pestered them. Immediately, Rob connected with smallmouth in the 3 pound class.


Being a team tournament, the focus is to do what’s best for the team. Pete explained how they worked co-operatively to hammer out their best day of the Classic.


Pete explains, “The wind was up a bit but nothing to be too concerned about so I positioned the boat to allow Rob to pick apart the area. Rob went to town on them. I allowed the boat to slip in to try and get in on the action but the wind had picked up as the rain was intensifying. We chose to keep Rob in a position where he could fish comfortable rather than risk blowing(the boat)  in on it and spooking the baitfish. Rob locked up with another good fish which tipped the scales at 5.35, and after a short fist bump and mini-celebration we knew we had a shot at a good bag.”


Working together was essential. With winds close to 50kms throughout the morning and early afternoon; Rob and Pete worked a tag team approach that was critical to their success.


“The swirling winds and gusts made reading the GPS difficult. Because I was controlling the boat it was easier for me to keep track of the sweet spots were and I help guide Rob by telling him which side of the boat to focus on.” Explains Garnier.


The weather caused the fish activity to drop periodically but they slowly managed to collect a large limit of smallmouth. The day went didn’t go without incident. While tucking in around an island for protection from the wind, Pete battled a giant that eventually pulled free of the hook. Both Rob and Pete admit that it was probably their biggest yet. This loss plus having another 4 pounder flip out of the net on Day 1 worried them.  Several other teams did well and Sunday’s weather was expected to be much different than stormy Saturday.


After battling wild weather all day, the team limped back to the weigh-in about 40 minutes early just to ensure they would make it.
Day 3

Sunday morning was cold and large patches of fog formed. CSFL relocated to the town of Peterborough for the Classic Final and cut the field to only the top 20 boats. Launching in the Otonobee River meant a winding, southward drive to Rice Lake. For safety, the anglers limited themselves to a 40 mph speed limit. 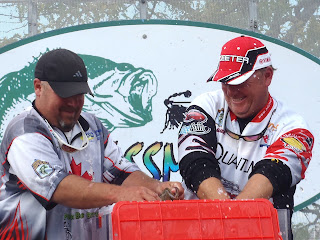 The fishing slowed yet the smallmouth were still in the same places. Slowly they accumulated their catch of 15.15 lbs. Worried that other teams had caught 20 lbs, Pete and Rob were unsure of the outcome. Overall, they were relaxed and just fished. When the scales settled their three day total was 53.35lbs and good enough to claim first place.
Critical Difference
There are always one or two things that propel anglers to the winner’s podium. For Pete and Rob it was two very important factors that helped them claim the 2012 Classic.


“Honestly it was during practice and realizing that those shiners were locked on those particular structures.”  Reflects Pete.  “Also noting that the BioEdge Shiner Potion seemed to be really tipping the odds in our favour. Throughout the three days on multiple spots, we were catching far more fish than any of the other boats around us.” Pete also explained that Rob was out fishing him on Friday. Once Pete starting applying the BioEdge scent, he was matching Rob fish for fish.