I know it’s time when the foliage has turned colors and fallen to the ground; when fernlike patterns appear on my truck’s windows every morning before driving to the lake. I know it’s time when Jack Frost comes nipping at my nose and toes leaving a thin, white layer of crystals. It’s time to resist the temptation of hiding under the covers. It’s time to go crankbaiting in the South.

Anglers in the South welcome the white ice crystals. It’s a sure indication of the changing of the seasons when bass move shallow to gorge themselves before the coming winter.

Although the Muscle Shoals, Alabama, fishing pro is more renowned for his deep offshore structure fishing, when November rolls around he switches crankbaits. He trades in his Bomber Fat Free Shad BD8 and BD7 for the shallow running Bomber Model 4A. 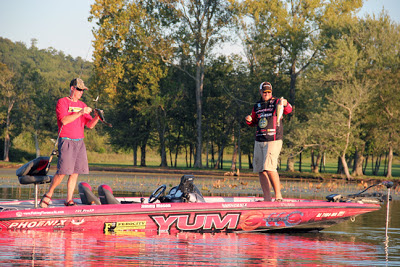 “The key to catching bass in November is finding out where the bass are located. I like to begin searching  in a main tributary that feeds the lake,” he said. “I go halfway back into it then fish toward the backend.
“Here’s what I’m talking about: On Wilson Lake down in Alabama there is a big creek called Shoal Creek. I will get back into it about a mile back then focus on fishing the channel swings inside the creek.”

Another bonus when fishing on Wilson Lake is the smallmouth. During November, big smallmouth move back into creeks feeding on schools of shad. Like the largemouth bass, smallmouth will use channel swings as prime locations for ambushing and gorging themselves on shad.

“The shad are always moving around during November. What I look for when fishing is shad on the surface,” he noted. “I also keep an eye out for surface action and birds.”

Horton noted that creek channel turns, or “channel swings” as they are commonly referred to, are key locations to find schools of bass during November. His favorite lure is a small, compact Bomber Model 4A crankbait for fishing channel swings or other locations in most autumn situations. Horton likes the wobble and thumping action of the 2 1/8-inch lure.

A shallow diving crankbait is Horton’s first choice, but that’s relative to the reservoir he’s fishing. 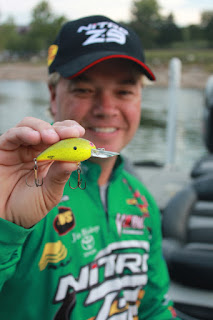 “Most of the time I will move away from the clear water if possible,” Horton continued, “I really like to be fishing in stained water during November.”
When fishing channel swings, Horton is searching for curves with 45-degree banks. Normally these will be steeper banks within the creek channel. The key to catching bass in these areas is bouncing the crankbait off cover such as lay downs or stumps.

Another favorite target of Horton’s when fishing creek channel swings is rocks. Big boulders or rock piles will have bass ganged up on them. To trigger strikes, Horton parallels the bank banging the crankbait into cover and rocks.

“The Bomber Model 4A will run 6- to 8-feet deep on 14-pound test fluorocarbon line,” Horton continued. “You get the most bites when the crankbait is consistently bouncing off the bottom.”

Besides using fluorocarbon line, Horton uses a Duckett White Ice Tim Horton series rod. The medium heavy rod is 7’4” in length and allows for longer casts in addition to having better leverage once a bass is hooked.

Deciding what color Model 4A to fish in November is easy for Horton.

“I like rootbeer chartreuse. It’s a confidence color for me,” he said. Other popular colors during the fall include shad patterns like Tennessee shad, threadfin shad, royal shad, silver flash, pearl blue/back, black pearl and foxy shad.

One other prima area for big schools of shad during November is a shallow flat on the inside the creek channel. The bottom composition doesn’t really factor into why the shad migrate to them -- the shad are feeding on plankton and the bass on shad.

Spotting schools of shad is easy on windless days. They swell against the surface in schools swimming round and round while nibbling at the surface making soft smacking sounds. The shad can be seen occasionally rippling the surface trying to escape a hungry bass.

Wind often plays a major part in the activity level of bass when they’re on the shallow flat.  On days with little or no wind shad will be extremely skittish. They may even move off the shallow flat towards deep water.

On days when the wind is blowing, bass will get shallow and aggressive. Often bass will leap out of the water chasing schools of shad. There’s nothing like being in the middle of schooling bass that have pushed the baitfish to the top and are churning the surface as they gorge.

Catching these shallow bass in skinny water, however, requires a different type of crankbait -- one that doesn’t dive deep, but wobbles and semi-rolls flashing its body. The square-lipped XCalibur Xcs is Horton’s go-to crank when catching these shallower bass.

All three sizes of Xcs dive to just 3 feet, which Horton finds perfect for this situation. To top it off, these are silent baits (no rattle), and he feels that’s important when fishing for pressured bass or when there’s no wind. A lack of disturbance on the surface can make both baitfish and bass skittish, and a loud rattle often is too much. For color patterns, Horton suggests mimicking the look of the baitfish.

Anglers should note that the shallow water crankbait bite gets better as the day progresses. Bass know from experience that the shad are easier to catch when they are swimming on the surface.

This November when Jack Frost comes knocking at your door, instead of grabbing another blanket grab your fishing pole, crankbaits and go experience the best crankbaiting of the year.
Posted by IBASSIN.COM at 9:44 AM