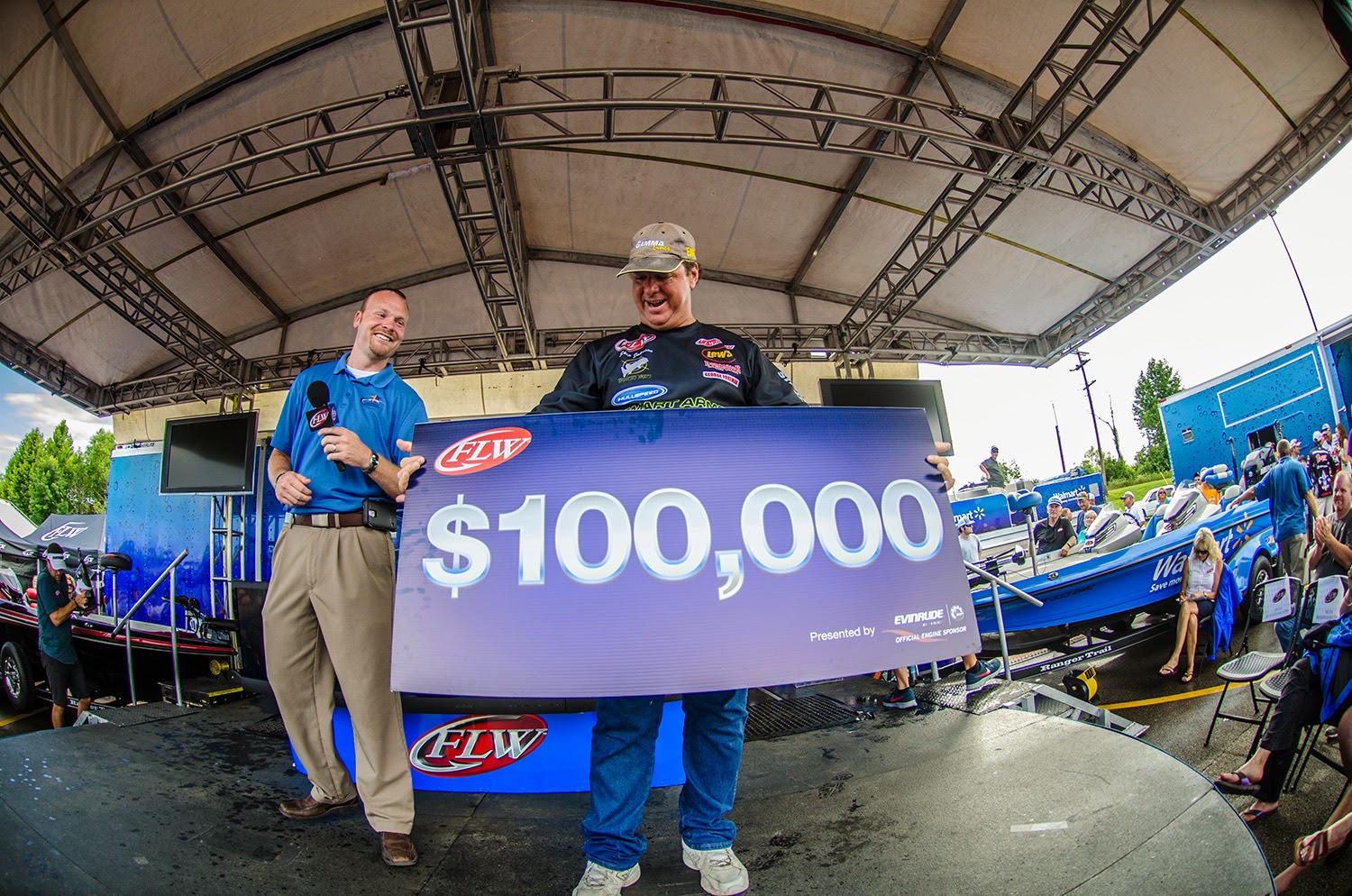 Sometimes simple strategies are the best strategies. And they don’t get much simpler than the game plan put together by Michigan pro Skip Johnson on Kentucky Lake for the sixth and final stop of the 2014 Walmart FLW Tour season.
His strategy: Don’t move.
Johnson spent all four days of competition on one hole on Kentucky Lake’s southern end. He landed more than 22 pounds each day Thursday and Friday. On Saturday, a string of lost fish cost Johnson, and he brought in just 19-12.
But Johnson rallied on Sunday. All day long he hammered away, catching more than 75 fish and culling up to the day’s best limit of 24 pounds.
The four-day, 88-pound, 10-ounce performance earned Johnson his first career Tour victory and a check for $100,000.
The triangle
“The key was to stay – don’t leave,” Johnson says about his performance on the final day of the event, which was presented by Evinrude and hosted by Henry County Alliance. “I parked right there and ran my little triangle again.”
The triangle describes the shape of a row of more than a dozen waypoints that Johnson dropped along a creek channel that snakes from a shallow flat out to the main shipping channel.
“It was a winding creek channel with old oxbows and humps in the oxbows,” he explains. “They were on the edge of the ledges dropping into the channel.”
The edges where he caught his fish were rocky and topped out in 10 to 12 feet of water. They dropped off into about 15.
Each day, Johnson worked in and out along the creek channel – once even following it all the way up onto the flat, just to see if any bass had moved in shallow.
When the fish quit biting, he simply slid in further or slipped to the next waypoint to try and reconnect. Sometimes he seemed to be casting in all directions to try and pinpoint where the bass had moved.

Sonar fish
New fish kept sliding in from the main channel to the creek channel each day, keeping Johnson supplied with quality keepers throughout the tournament.
The waypoints Johnson marked were close enough that he could move from one to the other with the trolling motor as the fish moved. The only real change he made all week came today, when he spent a bit more time studying the schools with his sonar.
“If I saw one here and one there, I wouldn’t get a bite,” he explains. “When they were piled up over each other, they’d bite. I definitely did a lot more graphing today. They were all sonar fish. I was using that Lowrance to the fullest.”
The extra sonar scouting was required to keep tabs on the fish during brief dry spells. Each time he found a school – there were several set up in the area – the fish cooperated. He ignited several flurries that produced 10 to 20 bites.
Johnson experienced a couple of afternoon highlights on the final day – before the weigh-in excitement, that is. He caught a 7-pound, 2-ounce kicker at about 1:30. Then on his last cast, he landed a 5-pounder.
“Up until then I had 19 pounds. Then I culled some fish out,” he says. “I was throwing back 3- and 3 1/2-pound fish all day. I wore the cameraman out.”
Tackle selection
Johnson was dialed in on tackle selection this week. On Saturday, he had just four rods on the deck. His best action came with a jig, but that’s also what he lost multiple fish with the third day.
Today, the No. 1 producer was a Western Plastics 8-inch worm in a crawdad color. Rigged Texas style, it was more difficult for the bass to shake free of than the jig.
Through four days of refinement and a steadfast commitment to what he knew could be the winning area, Johnson proved that there are still magic spots on Kentucky Lake that can produce a tournament win all alone. While other anglers faltered when conditions changed or angling pressure caused their fish to move, Johnson stuck to his spot and slowly climbed the ranks – from eighth to fourth to second and finally to the top.
One spot. Four days. A first win for the first-year pro.

Top 10 patterns
To read about the lures and patterns used by the anglers who made the top 10 this week, click here.