He started the event in 23rd place.
Then quietly moved to 12th.
He left the dock this morning in 7th place, eight and a half pounds off the lead. And when he returned this afternoon, Dave Lefebre shocked the weigh-in crowd with a come-from-behind Walmart FLW Tour win that left his competitors shell-shocked.
That’s correct; Dave Lefebre erased an eight and a half pound deficit on Lewis Smith Lake in a single day to win by nearly two pounds.
On a day when other top-10 pros stumbled, including leader Zack Birge, Lefebre brought in his week’s best catch – 19 pounds, 5 ounces – to make a stunning rally to victory lane.
“This feels good,” Lefebre said after collecting $125,000. “Last year was nightmare season for me, so this is sweet redemption.”
Full story and Results below
Since Lefebre lurked under the coverage radar for much of the event, not much is known about exactly how he was able to pull off such a remarkable feet in the 11th hour.

All week, Lefebre flirted with what many consider to be the dynamite of modern-day bass fishing: blueback herring.
Bluebacks are considered a lethal form of tournament-fishing dynamite because they can either launch you to the top of the leaderboard or they can blow up in your face and leave you in a cloud of smoke.
Lefebre played the fickle bluebacks carefully, making sure he had enough in his well each morning before flirting with the dynamite.
“I had two schooling spots where I could catch a few on a Fish Head Spin pretty quick first thing in the mornings,” Lefebre recounted. “Once I got a few in the well early, then I would go run the herring pattern in the afternoons to upgrade.”
Lefebre’s herring pattern was unique in that he found the herring spawning in pockets off of Rock Creek. The herring would only spawn in the mornings, from about 7:30 to 9:00 a.m. Lefebre said he could visually locate the herring spawn because they would get right up on the bank in shallow water in a big ball and thrash the surface, usually on single boulders at the water’s edge.
“I’ve never really seen that before,” Lefebre said. “They were so thick they would literally turn the water black in a frenzy. In fact, I didn’t even know if they were really herring. I only assumed that’s what they were because they were long and skinny – 8 to 10 inches – with really black tails.”
But the most ironic part was that when he would find the herring spawning in the mornings, there would be no fish feeding on them at all.
“It was so crazy,” he described. “I would throw my bait up there and the herring would bump and attack my lure like shad do during a shad spawn. But there was nothing eating them.”
Lefebre discovered the trick to the herring pattern was to return to an exact herring spawn location late in the afternoon, fire a Rapala BX Waking Minnow to the exact spot where the herring had been spawning that morning, and big largemouth would suddenly start fighting over his lure.
“It made no sense,” he continued. “In the morning when the herring were thick, there were no bass around them. Later in the afternoon, from about 1:30 on, when the herring were gone, big bass would be lurking around the exact place where the spawn had happened that morning.”
Lefebre made this discovery on the first day of the event when he returned to a pocket where herring had been spawning that morning and he caught a couple of solid largemouth on the BX Waking minnow.
“On day two I left my schooling spot early just to see if I could find more of those herring spawning in other pockets,” he said. “I was running pocket to pocket as fast as I could. I found a couple of more new wads spawning right up on the rocks. I marked those specific boulders and when I returned that afternoon, it was the same deal as the day before: the exact cast to the rock where the herring had been spawning with the Waking Minnow and the bass would blast it.”
As the week went on, Lefebre added more and more herring spawning sites to his list. By day four he had a total of six herring spawn places.
“The other weird thing was there was no rhyme or reason to what pockets they were in,” he said. “Maybe one out of every four or five pockets had herring spawning in them.”
The only constant Lefebre could find in the spawn sites was boulders and bushes. If there was a big boulder right at the water’s edge, surrounded by bushes, it fit the bill for Lefebre’s pattern.
“By this afternoon I had refined to the best five or six places,” he said. “I had a total of five different wake baits on the deck in various color patterns. Sometimes they would follow one color, then follow another color and then the third or fourth color would be the ticket.”
Once a bass hit the wake bait, they would literally fight over it as other bass would try to take the lure from the breadwinner’s mouth. Amazingly, Lefebre used this phenomenon to his advantage to catch two of his biggest bass on day four at the same time.
“I had 4-pounder hooked up,” Lefebre recalled. “As I was fighting him to the boat I saw another bigger bass – a 5- or 6-pounder – come up and start bullying the 4-pounder to take the lure away. So instead of netting the 4-pounder, I just let him swim around under the boat with the lure in his mouth – suddenly the bigger one charged the 4-pounder to steal the lure and got hooked too. Now I had both on at one time. I fought them both for nearly a minute before gaining control of them.”
And in one scoop of the net, Lefebre boated nearly half of his 19-pound limit.
“When things like that happen, you just know it’s your day,” adds the Smith Lake FLW Tour winner. “Today was one of the most special days of my career – I’ll remember it forever.” 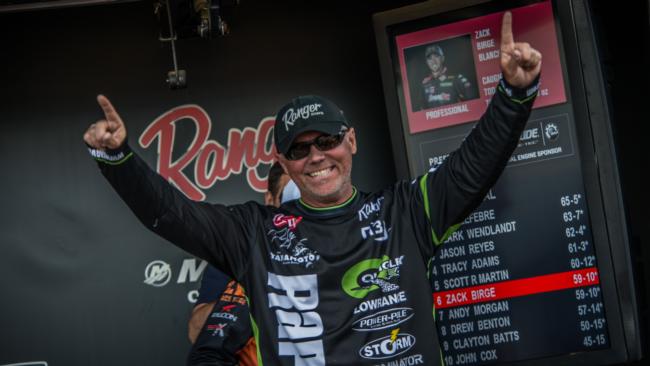