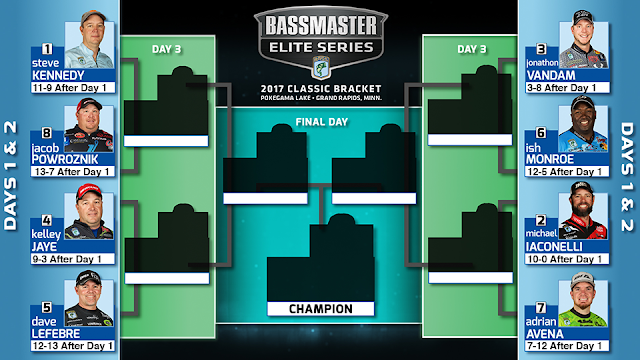 Last week, 39 anglers qualified for the 2018 GEICO Bassmaster Classic presented by DICK’S Sporting Goods through the Toyota Bassmaster Angler of the Year Championship.But eight more barely missed their shot at a Classic berth — and they’re getting one more chance this week with all of the action shown on Bassmaster LIVE.The Classic Bracket at Pokegama Lake features the first eight anglers to miss Classic qualification battling it out in a head-to-head, match-style format. Every fish caught during the catch-weigh-release event will be aired live on Bassmaster.com — and when the dust settles on Friday, the final angler standing will receive an automatic berth into the Classic, which will be held on South Carolina’s Lake Hartwell next March.
Competition began Tuesday with two three-hour sessions, with four anglers competing in the morning, followed by the remaining four anglers competing in the afternoon. All eight anglers will advance to Wednesday’s second round, with only the four match winners moving onto Thursday’s semifinals.
Morning matchesNo. 1 Steve Kennedy vs. No. 8 Jacob PowroznikTop-seeded Steve Kennedy of Auburn, Ala., found a few decent bass during his allotted three hours and claimed a good early lead in his matchup with eighth-seeded Jacob Powroznik of Virginia. But Powroznik kept chipping away and finished the morning session in the lead with 13 pounds, 7 ounces.Kennedy trails by almost 2 pounds with a mark of 11-9.“Things started off a little slow, but it just got steadily better,” Powroznik said after using a wacky-rigged worm and a drop-shot rig to catch all largemouth in a Pokegama Lake fishery that features both largemouth and smallmouth.Kennedy, the Alabama pro who earned his fifth career B.A.S.S. victory on Lake Dardanelle earlier this year, started his day with a swimbait in an area where he’d been seeing fish break the surface. His decision resulted in a 4-2 smallmouth on his first cast and a 2-15 largemouth just minutes later, but he boated only two small keepers after that.“That was right where my waypoint was, and they gave themselves away by jumping,” Kennedy said. “That was the biggest school of fish I could find. I never expected (to start with those big fish).”Powroznik started slow, with a flurry of small fish around docks before 8:30 a.m. But he began steadily culling up 30 minutes later and finished with a flurry, landing a 3-3 and 2-4 back to back as time was expiring.No. 4 Kelley Jaye vs. No. 5 Dave LefebrePennsylvania pro Dave Lefebre finished the morning session with five bass that weighed 12-13. That gave him more than a 3-pound lead over Alabamian Kelley Jaye who weighed in only 9-3.Lefebre got on the board quickly with a 2-8 smallmouth on a Senko and then seemed to find larger fish than Jaye throughout the day.While Jaye said he was intent on “1-pounding Lefebre to death,” Lefebre switched back and forth between a drop-shot rig and a jig to catch better bass, including a 2-6 from under a dock at 10:17 a.m. and a 3-8 as time literally expired.“That was a clutch fish right there,” Lefebre said. “It’s early yet, but that could be a Classic fish. This was fun. Give me three hours tomorrow, and it’ll be a different ball game.”Afternoon matchesNo. 3 Jonathon VanDam vs No. 6 Ish MonroeThe conditions seemed to play right into Ish Monroe’s hands, as the California pro who’s known for fishing a jig and a plastic frog was able to do both with great success.Monroe fished a black Ike’s 3/4-ounce Flip-Out jig with a Missile Baits D-Bomb for a trailer and the Ish’s Phat Matt Daddy Frog that he designed for River2Sea. The frog was also in a black pattern.He started slowly with a couple of 15-ouncers that bit under boat docks just after the session began. But just after 1:15 p.m., he made a perfect cast under a dock with his frog and landed a nice largemouth that weighed 3-3.After pulling one more good fish from beneath a dock, he moved to shoreline grass and put on a show with the frog, landing a 1-10, a 2-9, a 2-14 and a 2-7. Monroe’s five best fish from the round weighed 12-15.Meanwhile, Michigan pro Jonathon VanDam applied a vastly different approach and didn’t fare quite as well. VanDam targeted mainly offshore cover in search of smallmouth and brought back only two fish that weighed 3-8.No. 2 Michael Iaconelli vs. No. 7 Adrian AvenaIn a battle of New Jersey pros, the veteran Michael Iaconelli seemed to be the more comfortable of the two from the start.The 18-time Classic qualifier used a Missile Baits Mini-Flip 1/2-ounce jig to catch fish repeatedly around windblown docks. He caught a 1-13 at 12:52 p.m., a 1-14 at 1:43, a 1-3 smallmouth at 3:13 around offshore reeds and a 2-11 at 3:25 from those same reeds.“That last fish (the 2-11) was big for me in more ways than one,” Iaconelli said. “Obviously, it helps me today. But it also tells me a lot about what I need to be doing tomorrow.”Avena, who never quite seemed comfortable after changing locations before he made a single cast, caught just four fish that weighed 7-12.“I’ve got to do something totally different tomorrow,” said Avena, who is attempting to earn his first Classic berth. “Maybe I’ll run points and hope to run into five quality ones. With us fishing in the morning, maybe those boat docks will be good. They haven’t been for me yet.”All eight anglers will fish again Wednesday with the schedule inverted. The Iaconelli-Avena and Monroe-VanDam matchups will begin at 7:30 a.m. CT, while the Kennedy-Powroznik and Lefebre-Jaye matchups will shift to the afternoon at 12:30 p.m.

The local host for this event is Visit Grand Rapids.
Posted by IBASSIN.COM at 2:00 AM