The 2018 CSFL Classic returned to the rugged shores of Stoney Lake in North Kawartha, Ontario on September 8 to 10th. The dynamic duo from Curve Lake, Mike Williams and Duane Jacobs were crowned champions again one year after their first Classic win. Williams and Jacobs bested the 78 team field with a three day total of 40-85lbs. Father and son team Stuart and Jesse Evans missed the win by a razor’s edge with 40-4lbs. Third was captured by Cesare Ruscio and Mike Quesnelle who sacked 39-7lbs.

IBASSIN.com chatted with the newly crowned champs for a rundown on how they secured back-to-back Classic wins on Stoney Lake.

Pre-fishing
“We never practice on Stony Lake!” insists Duane Jacobs. “We have a ton of experience on that lake but most importantly we have experience during this time of year.” Early September is a tricky time of year for bass. Cool mornings and warm afternoons confuse bass and frustrate tournament anglers even more. “The conditions were fairly similar to last year when we won but this year we focused on largemouth and skipped trying for smallmouth until the last day were we landed two.” 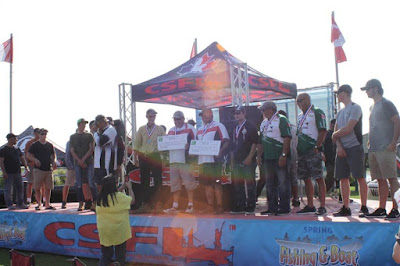 Tournament
Friday, the first day of competition, was lack luster at best with a limit of only 12.3lbs.  Saturday’s 15.6lbs limit was a big improvement.  That propelled them into 4th place and qualified them to fish on championship Sunday as part of  “Top 12”. “The trick to succeeding on Stoney Lake is to stay consistent. The guys who have a big bass will have a great day but if you don’t get that big one you’ll likely only have a 6 or 7 pound limit.” Assures Jacobs. “Over the first two days, we discovered that our largemouth spots were producing much better in the afternoon so we targeted our best spots during that prime time period.”  Sunday had Mike and Duane tried to
secure a few good smallmouth during the morning as they waited until the afternoon bite would spark. Two chunky smallmouth came over the gunnel that last day, the largest being part of the winning 12.95lb limit. Luckily for them, that smallmouth was a key fish as Sunday became the stingiest of the tournament days with most team barely scratching out 11 pounds.

The champs focused on areas more than a true pattern. Each area was fished thoroughly at a variety of water depths. They usually focus on deep weeds on Stoney but this year the fish where scattered.

Winning back-to-back championships is a rare feat. But this event was truly memorable. “It was special because it was a repeat win on a tough lake and really tough conditions that wasn’t giving up the bites as easily as it usually does…we had amazing support from our families friends and fellow anglers at the final weigh-in which was amazing.” Reflects Mike “We had a lot of people pulling for us to do this again and may have gotten a little extra help from above from my late grandfather Wellington "Wang" Williams and others to help us pull it off.”

Winning baits
The pair really divvy up duties while team tournament fishing. Mike is on jig duty and Duane throws soft plastics.  The key bait was an all black Punisher Jig with a blue plastic chunk trailer.

“Having confidence in what you are throwing is a big part of consistently catching the (quality) bass we need to do well in tournaments.” states Mike “All you have to do is look at the success of the creator (Jarrod Dean )of these jigs and the great anglers that use them to know that they are the best.”

Mike Williams and Duane Jacobs are fierce competitors who have married family, friendship, fishing and fun into a winning package.
Posted by IBASSIN.COM at 3:30 AM