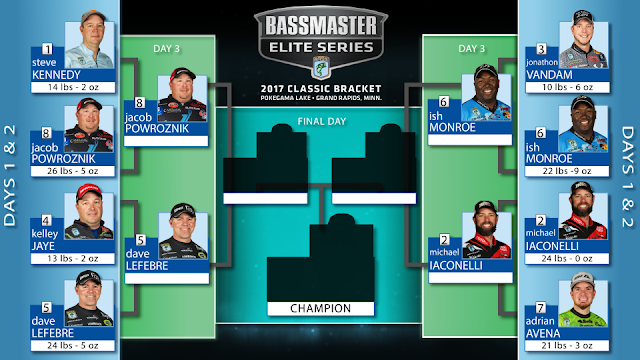 After two full days of fishing the Bassmaster Classic Bracket last-chance tournament on Pokegama Lake, four anglers moved a step closer to earning a berth in the 2018 GEICO Bassmaster Classic presented by DICK'S Sporting Goods to be held on South Carolina's Lake Hartwell.
During the morning session, California pro Ish Monroe won his head-to-head battle with Jonathon VanDam and earned a spot in the semifinals, while New Jersey veteran Michael Iaconelli kept his chances alive for a 17th straight Classic berth with a victory over second-year B.A.S.S. pro Adrian Avena.
During the afternoon session, Virginia pro Jacob Powroznik cruised past top-seeded pro, Steve Kennedy, who finished second in the 2017 Classic. Pennsylvania pro Dave Lefebre earned his spot in the semifinal round by defeating Alabamian Kelley Jaye.

The four remaining anglers will fish from 7:30 a.m.-1:30 p.m. CT Thursday, with the weights starting back at zero. Iaconelli will face Monroe, and Lefebre will square off against Powroznik. The two anglers who survive Thursday's round will fish head-to-head on Friday with a Classic berth on the line.
Here's a look at how the matches played out Wednesday during the catch-weigh-release event that featured start-to-finish coverage by Bassmaster LIVE on Bassmaster.com.

No. 2 Michael Iaconelli vs. No. 7 Adrian Avena
The two New Jersey pros put on an entertaining show Wednesday, but it was Avena's struggles on the first day of competition that ultimately made the difference.
Ike caught five fish Tuesday that weighed 10-0, while Avena managed just four that weighed 7-12. They were almost even Wednesday, with Iaconelli bringing in a five-bass limit that weighed 14-0 and Avena catching five that weighed 13-7.
But Avena's one missing fish loomed large as Iaconelli won 24-0 to 21-3.
Avena promised a big change for Wednesday after his opening struggles, and it came in the form of a buzzbait that produced for him throughout the day. But Iaconelli never wavered.
After landing a nice fish from some pencil reeds late Tuesday, Ike returned to those reeds Wednesday with a Missile Baits Mini-Flip jig and caught bass almost constantly. On the rare occasions when a fish missed on the jig, Iaconelli would follow up with a wacky-rigged worm to put the bass in the boat.
"When I caught that last fish Tuesday, I said it was big in more ways than one," Iaconelli remembered. "It showed me what I needed to be doing today."
Now, it could also be big the rest of the week as Ike moves on to the semifinals.
For Avena, his season will end for the second straight year without a trip to the Classic.
"I told myself after yesterday that I wanted to come out and have fun with it," Avena said. "That's what I did. I just didn't get enough bites, and Ike did his job."
No. 3 Jonathon VanDam vs. No. 6 Ish Monroe
Monroe didn't have quite the luck Wednesday that he had Tuesday afternoon. But then, he didn't really need it.
Monroe caught five bass Tuesday that weighed 12 pounds, 15 ounces, while VanDam of Michigan caught just two that weighed 3-8.
So, when Monroe caught a decent fish on topwater just 10 minutes into the morning session Wednesday — and then followed with a 2-13 and a 2-5 during the next 30 minutes — the competition was all but over.
VanDam fared slightly better Wednesday after switching from a jerkbait to a spinnerbait. He landed a 1-4 less than 10 minutes into the session and followed quickly with a 1-5 and a 1-2.
But JVD's Wednesday total of 6-14 added to his Tuesday mark of 3-8 gave him a two-day score of 10-6. That was more than 11 pounds back of Monroe's two-day mark of 22-9.

No. 1 Steve Kennedy vs. No. 8 Jacob Powroznik
The two anglers started in a tight battle after Powroznik landed 13-7 Tuesday and Kennedy reeled in 11-9.
But the match quickly turned into a blowout as Kennedy — a noted swimbait specialist — struggled to catch a bass until after 2:30.
"I'm a little bit nervous about these bluebird skies," Kennedy said as the afternoon session began at 12:30 p.m. CT. "The fish are here, but they're not relating to the bottom."
While Kennedy caught only two bass and a few small yellow perch, Powroznik seemingly could do no wrong. He landed a 2-4 at 12:38, a 3-0 at 12:55, a 2-11 at 12:57 and a 1-5 at 1:15.
He seemed able to call his shot, moving into the shoreline occasionally to catch fish from under docks and then moving offshore to catch fish on a drop-shot rig. His total for the day was 12-14, and his final two-day total was 26-5.
"I've got one spot that I found in practice where I caught some 3 1/2-pounders, and I haven't even been there yet," Powroznik said. "So, I'm feeling pretty good right now. But things can really change in a hurry."
Kennedy finished with just 2-9 Wednesday, and his two-day total for the event was 14-2.
No. 4 Kelley Jaye vs. No. 5 Dave Lefebre
The other afternoon matchup was also close at the beginning after Lefebre caught 12-13 on Tuesday and Jaye landed 9-3.
But Jaye got a bit of a bad omen early when he pulled up on a spot expecting to catch smallmouth and quickly landed two big northern pike on a jerkbait. When he finally caught a bass, it was a skinny largemouth that weighed just 1-2 — and it was the last fish he would catch for more than an hour.
Lefebre, meanwhile, was on a roll targeting shoreline boat docks with precision casts.
He caught a 1-15 at 12:32 off the first dock he fished. Then he continued exploiting docks to catch nine bass that weighed 16-14. His biggest five weighed 11-8, and his official two-day total for the match was 24-5.
"Even though I caught two early, I was starting to feel like I was fishing used water," Lefebre said. "Then I caught a 2 1/2-pounder, and it really helped me relax.
"That changed the way I fished. I caught a 2-15 around 1:30 that I wouldn't have caught if I hadn't already had a limit because I wouldn't have picked that place apart like I did."
For the day, Jaye finished with three bass that weighed 3-15. His final two-day total was 13-2.
The local host for this event is Visit Grand Rapids.
Posted by IBASSIN.COM at 2:00 AM