Jocumsen Signs with Rapala for 2021 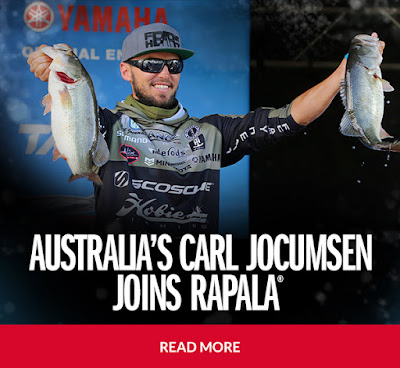 Rapala® Australia will help Bassmaster Elite Series pro Carl Jocumsen achieve his dream of becoming the first Down Under angler to raise a Bassmaster Classic trophy. The company this month signed its native son to fish Rapala hardbaits in his quest to top the ranks of Bassmaster competition in the U.S.

“We are proud of how hard Carl has worked and how far he has come over the past 10 years in the U.S. and are happy to help him strive to achieve his goal of fishing the Bassmaster Classic,” says Tim Morgan, Rapala Australia National Sales and Brand Manager. “Now that he is using Rapala, I am sure he will achieve the goal even sooner.”

The only Australian to qualify for and compete in the Bassmaster Elite Series in the U.S., Jocumsen remains the all-time tournament-money-earner back home in Australia, despite not having fished a competition there for more than a decade.

“Carl Jocumsen is undoubtedly the best bass fisherman Australia has ever produced,” Morgan says. “Rapala Australia is really excited to be pairing up with him, as we share his passion and enthusiasm for the sport of fishing. Carl is a great role model for the emerging generation of anglers in Australia.”

“We were thrilled to hear of Rapala Australia’s interest in working with Carl, as he’ll fit right into our team of B.A.S.S. pros here in the States,” Quinn says. “B.A.S.S. and Rapala are both international brands, so it’s pretty darn cool to connect the two of us on an international level through Carl. His presence in the Australian and US markets is undeniable, he’s worked very hard and overcame many obstacles to be where he is today.”

“Thinking about the journey and where I’ve come from and where I am now, and then to have that company reach out and want to support and back me is really huge,” Jocumsen says.

Although a Rapala logo will appear on Jocumsen’s tournament jersey for the first time this year, his tackle boxes have long been filled with Rapala baits. “I didn’t really need to order that many lures, because I already had a lot of them – they were already in my arsenal,” he says. “These are baits I have tied on already, have confidence in already. Rapala has been a part of my fishing journey ever since I can remember.”

One of Jocumsen’s best baits back home was a Rapala topwater lure. “Getting Australian Bass blow-ups on a Skitter Pop® is something that is still cemented in my head from being a kid,” he recalls.

Email ThisBlogThis!Share to TwitterShare to FacebookShare to Pinterest
Labels: Jocumsen Signs with Rapala for 2021