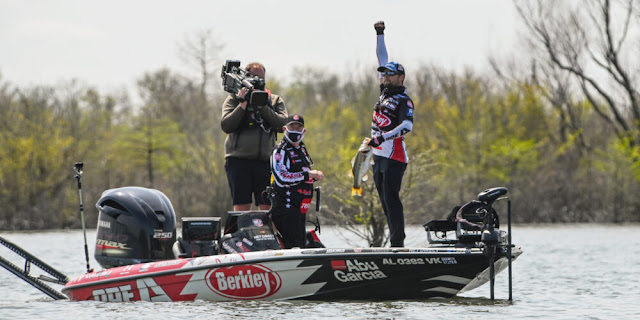 It was another tough day of fishing for the majority of the 38-man field in the Toro Stage One Presented by Power-Pole Knockout Round on Sam Rayburn Reservoir, but eight anglers stood out above the rest. Those eight —Justin Lucas, Cliff Pace, Jeff Sprague, Luke Clausen, Tommy Biffle, Cliff Crochet, Bobby Lane, and Mark Davis — will be moving on to the Championship Round, joining Gerald Spohrer and Ott DeFoe to complete the 10-angler field.

Justin Lucas made a strong case on Thursday for why he should be considered a favorite to win his second Bass Pro Tour event in as many years. The Alabama pro not only had the best day in the Knockout Round, but the best day of the event so far with nine bass for 36 pounds, 13 ounces. Lucas took a finesse approach with a drop-shot, a strategy he adopted after a solid round on Wednesday.

“I was trying to force myself to catch fish on the bank and they just weren’t there,” Lucas said. “There’s millions of fish in this lake and they all aren’t on the bank. I’m finding them on big grass flats in 3 or 4 feet of water. They’re prespawn and spawning out there.”

Lucas caught the majority of his fish on a drop-shot, but it was a big swimbait fish he caught during his second Qualifying Round that really brought the finesse mindset to the forefront.

“When I caught that 7-14 on a swimbait on Wednesday, I knew that I needed to switch things up,” Lucas said. “I told myself to back off these fish, get away from the bank and look for areas in these flats where they can be spawning or staging. It worked out and I think I know how I’m going to attack tomorrow.”

After a Top-10 finish at REDCREST in February, Bass Fishing Hall of Famer Mark Davis came into Stage One looking to build off that momentum. He ended his first day on Sam Rayburn at the top of SCORETRACKER® but found himself below the Toro Cut Line with only 20 minutes remaining in the day.

Davis was able to find some new water and brought in a crucial 6-8 bass to rocket him up SCORETRACKER® and into the top eight. As he took his boat out of the water and prepares himself to fish another Championship Round, Davis expressed the relief he felt after landing that 6-8.

“That fish meant everything to me,” Davis said. “I could only figure out one way to get a bite all day, and that was with a Carolina rig. To be able to catch that fish right there at the end and lock up a second-straight Top-10 finish was a great feeling.”

Luke Clausen was another angler who found himself outside of the top eight with time winding down. The Washington pro added a 2-14, 4-3 and 3-14 over the final two hours to lock up a spot in the Championship Round.

“I was getting really stressed because I went from third place to out of the top eight in such a hurry,” Clausen recapped. “I caught that 3-14 in the final few minutes to secure my spot and I’m glad I did because I was afraid I was going to fall out. I’m excited to get out there tomorrow and give it a shot at winning this thing.”

For the sixth time in his Bass Pro Tour career, Jeff Sprague will be fishing in a Championship Round. The Texas pro has fished in 14 out of 16 Knockout Rounds in Bass Pro Tour history but is still looking for his first regular-season win. Sprague won the 2020 Challenge Cup in Mountain Home, Arkansas in MLF Cup competition.

Cliff Crochet and Tommy Biffle will be fishing in the Championship Round for the first time during their respective stints on the Bass Pro Tour. Ott DeFoe, Justin Lucas and Cliff Pace will all three be looking to win their second event on the tour.

The weights reset back to zero as the 10 advancing anglers take on Sam Rayburn for Friday’s Championship Round. The angler with the most weight at the end of three periods will be named the Stage One Champion and earn a $100,000 payday. It’s going to be a clear night across east Texas with temperatures dropping into the mid-50s. The anglers should expect sunny skies and temperatures in the 70s for competition on Friday.