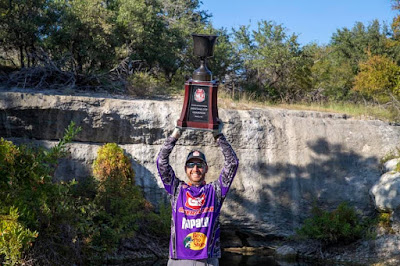 It came down to the final 30 minutes on a stingy Sam Rayburn Reservoir, but for the second time in as many years in the state of Texas, Ott DeFoe is a Bass Pro Tour Stage champion. DeFoe won the Toro Stage One Presented by Power-Pole by narrowly edging out Luke Clausen by 2 pounds, 13 ounces with a total weight of 13 bass for 30-2. The win is DeFoe’s third MLF win in the state of Texas after he won Stage Three of the Bass Pro Tour in 2020 at Lake Fork and the 2021 Heritage Cup in Waco, Texas.

DeFoe started out his morning like he had every day of competition thus far—on fire. The Tennessee pro landed 10 bass for 22-8 in Period 1, but his pace slowed dramatically in the afternoon. DeFoe went more than five hours without a scorable bass and fell into second place behind Luke Clausen because of it.

“I had to work for every fish I caught today,” DeFoe recapped. “I had to use a crankbait, spinnerbait, bladed jig, wacky worm, and a swim jig. It was a grind and I thought I had other places that would be productive. But there was a ton of boat traffic up by the river, so I just decided to go fishing.

But DeFoe never panicked. DeFoe went back up the river, found more laydowns, brushpiles, and current. He caught them when he needed them the most. In the final 15 minutes, as he was in an area with poor connectivity, DeFoe landed a 2-12 to tie Clausen and then a 2-13 to pass him for the top spot. The 2-13 margin of victory is the closest in Bass Pro Tour history, and DeFoe is glad he can finally catch his breath out of one of the more stressful days of his career.

“All of the stress you could ever imagine, I was feeling that last hour,” DeFoe expressed. “I knew we were going to have poor connectivity so my official was going to make me move with five minutes left. I didn’t know if Luke had caught another and I knew we were close. Just that feeling of relief when I knew that I had it was amazing.”

DeFoe is no stranger to winning in Texas and he has now won the last three MLF events held in the Lone Star State. When asked about what exactly it is about Texas that makes it like a second bass-fishing home to him, DeFoe had a simple answer.

“When you come to Texas, bass act like they’re supposed to,” DeFoe stated. “I tell everyone who asks me that same question that answer. I’ve won here on three completely different fisheries but caught them the way I knew they should be caught at that time of year in that particular environment. They eat shad, they live around cover, and they like current.”