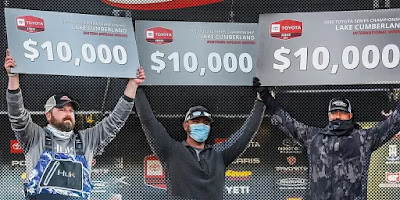 The Competitive Sport Fishing League is proud to announce Canadian anglers can now qualify for the Toyota Series Championship, an opportunity to win up to $245,000, through the MLF Canadian Open!

Stouffville, ON - Thursday, March 25. The Competitive Sport Fishing League “CSFL” is proud to announce a new partnership with Major League Fishing presenting the opportunity for Canadian anglers to qualify for the Toyota Series Championship through the MLF Canadian Open! The top two Pro Anglers and top two Amateur Anglers will advance to the Toyota Series Championship taking place October 28 through 30, 2021 on Pickwick Lake.

“We are thrilled to continue our work with Andrew Pallotta and the Competitive Sport Fishing League to provide Canadian bass anglers with an opportunity to advance to the Toyota Series Championship in the United States,” said Dave Washburn, MLF Vice President of Operations. “Canadian anglers can fish close to home and qualify for one of the sport’s most prestigious events for a shot at winning as much as $245,000, including a $35,000 Phoenix Boats bonus and $10,000 as the highest finisher in the MLF International division.”

The MLF contingency has been merged with the existing Canadian Open of Fishing Pro/Am event taking place July 10th and 11th on Lake Simcoe and newly branded as the MLF Canadian Open. The MLF Canadian Open will continue with the current Pro/Am structure, Pro Anglers teaming up with Amateurs competing for cash and prizes along with qualifying for the Toyota Series Championship.

Andrew Pallotta of the CSFL states, “We are excited to once again work alongside Kathy Fennel, Executive Vice President, and Dave Washburn, Vice President of Operations, of the Major League Fishing team and in particular granting the opportunity to four Canadian anglers to participate in the acclaimed Toyota Series Championship with Pro’s given a shot at $235,000 and one in twenty chances of winning $10,000 for being the highest finisher in the MLF International division and with all Co-anglers competing for a $33,500 Phoenix 518 Pro bass boat powered by a 115 HP Mercury Outboard! We strive to deliver the top fishing production in Canada and are honored to be recognized and be the Canadian representative of Major League Fishing.”

Email ThisBlogThis!Share to TwitterShare to FacebookShare to Pinterest
Labels: CSFL and MLF Partnership