2022 Tackle Warehouse Pro Circuit Presented by Fuel Me on the James River: Buck Continues to Lead! 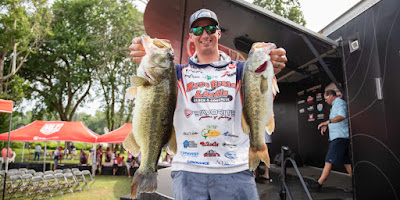 RICHMOND, Va. – Day 2 of Toyota Stop 5 Presented by PowerStop Brakes on the James River offered much tougher fishing than the catchfest that was Day 1. Limits still came easy, but much smaller totals replaced yesterday’s parade of bags in the mid to high teens. The sunny, hot day with a later tide window was the primary justification from the anglers with lower catches, and only Cole Hewett was able to catch more than 20 pounds.

Backing up his leading bag from the first day of fishing, Pennsylvania’s Grae Buck added 15 pounds, 2 ounces, to retain the lead. His 36-5 total has him 2 pounds ahead of Jacopo Gallelli. Behind the leaders, you have to look down the standings to 18th place to find someone with less than 30 pounds.

“I ran the same gameplan as yesterday, but with the tide difference, I had to wait longer for it to get right and for the fish to set up,” Buck said. “Once they did, I caught a 6-pounder on a Z-Man Bang StickZ in California craw, letting it flutter in the current and working it really slow.”

Buck is Neko rigging the bait with a Hayabusa FPP Straight Worm Hook with a Z-Man Neko ShroomZ Wacky Rig Nose Weight. Buck shared that he has also scored fish on a swim jig and a ChatterBait this week.

He described his primary area as a flat with two small drains running through it. It’s worked out very well so far, but losing the spot is on his mind.

“I’m tempted to start somewhere else because the right tide will be even later tomorrow,” Buck said. “I don’t want to sit there and waste two hours waiting for the tide to be right. It’s a gamble because someone else could pull in there. Each day moving forward will be a longer and longer wait.”

Buck said he’s also targeting fish around duck blinds and had some time today to explore more of the Chickahominy for new areas.

“After I had a decent limit, I ran to the top of the Chickahominy because I didn’t have time yesterday,” he said of his early check-in time on Day 1. “I wanted to see what was going on up there and found some decent wood to fish. I feel like what I did will help me expand my areas if I need to, if I can make it to the final day.”

It appears the preeminent Italian in bass fishing has tidal fisheries figured out as he sits in second place on the James almost a year to the date after his triumph at last year’s Pro Circuit event on the Potomac River. He bagged 18-9 on Friday, giving him 34-5 after two days. Gallelli knows what it takes to win but is also looking at a potential berth on the Bass Pro Tour. Coming into this event, he was sixth in points and is in good shape to improve on that.

“I got a taste of what a win was like on the Potomac, but I’m fishing for points this year,” he said. “My main goal this season isn’t to win an event, it’s to qualify for the Bass Pro Tour.”

Gallelli is mixing in various techniques and staying flexible, which he believes explains his success on tidal fisheries.

“You need to be flexible and not strict with what baits to use,” he said. “Today, I caught them with four different techniques and yesterday it was five. I’m fishing a lot of different things, from moving baits to finesse. I’m starting to understand how the fish are positioning and feel like I can catch them during all tide phases.”

Gallelli’s keeper count was halved from 30 yesterday to 15 today, but Gallelli feels good about his prospects for advancing based on what he’s learned this week.

“I’m going to fish more intelligently tomorrow,” he said. “I don’t have a strict game plan and will go with the flow. After tomorrow, the weight starts at zero, so I have to think ahead.”

After bagging 20-15 to start the event, Dakota Ebare added 12-8 to fall one spot to third. His bag on Friday was significantly helped by some key fish late in the day, including a fish over 5 pounds.

“That was a big relief to catch that one,” he said. “I caught her an hour before I had to leave and also culled a few times in that period. The fish didn’t bite well on an outgoing tide today for some reason. Incoming was great, even though it didn’t look like I had a lot to show for it. Tomorrow’s a later tide, so I won’t even be able to fish that tide in the afternoon.”

Ebare is a bit torn about making the long run to the Chick again on Day 3.

“I know the pressure has been really bad in my areas, but there are a ton of fish down there and when the tide is right, they bite and it doesn’t seem to matter,” he said. “Quite a few guys fishing down there made the third day and you have weekend pressure, too. I don’t know if I should scrap everything and try somewhere up here to fish low tide on somewhere I’ve never been.”