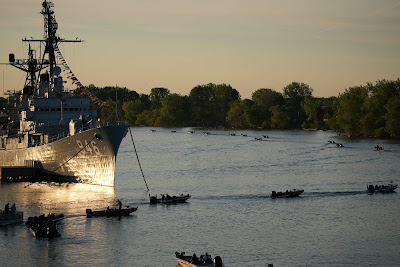 BAY CITY, Mich. — Last year, the Strike King Bassmaster College Series presented by Bass Pro Shops made its inaugural journey to Saginaw Bay, and anglers reported catching 50 to 60 bass in a day along with multiple 20-pound bags of both smallmouth and largemouth.

This year, young anglers will make the trip North again for the Bassmaster College Series at Saginaw Bay June 9-10. Former Elite Series pro Garrett Paquette, who currently competes in the St. Croix Bassmaster Opens presented by Mossy Oak Fishing, believes the fishing could be even better.

“There’s a little part inside of me that is going to be selfishly disappointed when the world is exposed to how great the fishery is,” the Canton, Mich., native said. “If they have good weather for this tournament, it is going to open a lot of eyes around the country.”

Located on the southwestern side of Lake Huron, Saginaw Bay has flown under the radar as a premier smallmouth fishery — and the largemouth fishing has improved greatly over the past couple of years in both quality and quantity.

The Auburn University duo of Tucker Smith and Logan Parks won last year’s tournament with a two-day total of 40 pounds, 9 ounces, catching both smallmouth and largemouth.

“The cool thing about Saginaw Bay is, you don’t have to run to one certain area to catch bigger fish. There are fish along all the shorelines, all of the islands,” Paquette said. “Guys are going to find stretches of spawning fish and big prespawn females, but you don’t have to run to a certain area to win. I know tournaments get won on every little corner of that bay, which is really unique.”

Winter and spring have been on the cooler side in the Northern part of the country, according to Paquette, and he thinks that will push back the prime smallmouth spawning time to around the start of the tournament. The prespawn and spawning smallmouth will likely set up on rock-related structures like boulders, gravel and rock-to-sand transitions. If there are smallmouth on bed, anglers will likely be able to see them.

A wide range of baits, including drop shots, Ned rigs, spinnerbaits, swimbaits and jerkbaits might come into play.

“Right around Memorial Day is usually the prime fishing time,” he said. “But with this year being so cold, it is setting up to probably be best when these teams are going to be there. If the weather is good and guys can get around, smallmouth are going to win most likely.”

Near the shoreline, the largemouth will get in the cattails, reeds and other grasses and are also prevalent in the Saginaw River. Paquette said numbers of largemouth are easy to come by, but with higher water levels the past couple of years, the quality has improved to the point that anglers can compete with a mixed bag or largemouth alone. The largemouth will likely be postspawn, biting topwaters, swim jigs and flipping baits.

“It is probably the most underrated largemouth fishery there is,” he said. “It is nothing to go up there and catch 60, 70 to 100 largemouth a day close to the bank and in the grass. It used to be that you could only catch 2- and 3-pound largemouth, and they were fun to catch but didn’t have an impact in tournaments. But now, it is getting to the point where guys are catching 4- to 6-pound fish.”

The most prevalent factor on Saginaw Bay is the wind, and Paquette said some of the roughest water he has experienced was on that fishery.

The full field will compete June 9-10 with daily takeoffs from Independence Boat Launch at the USS Edison Battle Ship at 5:30 a.m. ET. Weigh-ins will take place back at the ramp at 2:30 p.m. Coverage can be found on Bassmaster.com.

The tournaments are being hosted by the Michigan B.A.S.S. Nation.