Combs put together a five-bass limit weighing 27 pounds, 4 ounces, for a total of 55-12 to hang onto the lead going into the final day of the world championship on Lake Conroe. He’s still ahead of Toyota pro Mike Iaconelli of New Jersey, who had 25 pounds Saturday and trails with 51-12.

“It’s a grind, it really is,” said Combs, who guided on Lake Amistad in Del Rio before moving east to Huntington earlier this year. “I caught a 6-12 pretty quickly with the second flight going by me, and then another one but then went about three hours before I caught another one.”

Zoom pro Todd Auten of South Carolina surged into third place after switching gears from shallow to deep water Saturday. He caught 24-4 and has a total of 41-12, well behind Combs and Iaconelli … although one big bite on Conroe could swing the pendulum and two big bites could be a complete game-changer.

The 10 pros will launch from Waterpoint Marina at 8 a.m., with the final weigh-in at 4 p.m. Live scoring will be available at www.ToyotaTexasBassClassic.com until about midday, when it will be frozen prior to the live-stream weigh-in. 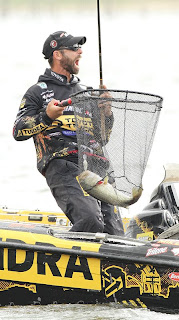 Combs grinding Combs is hitting more than 50 areas on Conroe and wasn’t as worried Saturday with the way his start mirrored the first day.

He added three keepers after his three-hour drought and then went hunting for anything to round out his limit.

“It was probably about 12:30 when I decided to just try to catch something to get my limit,” he said. “I got that one and then settled down a little bit. This kind of fishing is the way I’m comfortable with, and I’m making more stops probably than I ever have in a tournament.

“At each place, I’m probably making five or six casts and then getting out if I don’t get a bite. It’ll either be a big one or there won’t be one. That’s all I’m looking for.”

Combs said he spent about a week here last year and then a few days this year prior to the official practice this week, so he’s comfortable with what he’s doing.

“It’s all or nothing,” he said. “I’ve put in my preparation and if I don’t win, I don’t know what else I could have done differently.”
Iaconelli surprised
Friday evening, Iaconelli said he figured the first day would be the one to pound on the fish to build the weight because of the cloudy, windy conditions that would disappear Saturday.

With the cold front having moved through overnight, Saturday arrived with sun and bluebird skies. That’s typically not the best thing for fishing since high pressure often puts bass close to cover and post-frontal conditions give ‘em lockjaw.

“My first spot I caught a 4- and 7-pounder and thought ‘Hmmm …’ because they were biting,” he said. “I figured today would be the one when they didn’t bite as well.”

Iaconelli still is running his pattern he developed earlier this week but didn’t yield any insight about specifics.

“I had a really good day and caught fish all day,” he said. “I’m happy with it and am happy to be fishing another day. You always want to be in the position to have a chance to win.”