With the Lake Simcoe Open, sponsored by Bass Pro Shops, only days away, I wanted to find out how the bass have been biting. Last year, the conditions were ideal for a smallmouth slam and that was what happened. Two major league records were broken: heaviest 5 bass tournament creel of 31.5 pounds and largest bass, a 8.05 pound smallmouth, ever weighted in a tournament in Canada.
The Bass Pro Shops Lake Simcoe Open has become Canada's premier one-day bass fishing tournament; especially if smallmouth are your game.  Largemouth rarely factor in this tournament and considering the last few years a limit of 25 pounds didn't raise an eyebrow, this is a true trophy smallmouth fest.
Here are a few quick chats with two seasoned Simcoe anglers

Peter Savoia
(Past Classic Champ won on Lake Simcoe and Owner of Set The Hook)
Pre-fishing: "Spent about 3 full days so far on the Lake. The weather has been terrible with choppy water." Peter summarizes the fishing as poor. "The fish are scattered and have bad lock-jaw" laments Savoia
It is also hard for him to catch multiple fish from one spot. After the first one, the second or third bass is really difficult to make bite. Peter feels the warm Thanksgiving has delayed the seasonal fall movement. Earlier in the week, Peter found water about 60F and today (Thursday) the water was in the 54F range. Far warmer than he would like.
Winning Weight: "I cannot say. I really don't know but I can say for sure the record (31.5 pounds) is safe this year." comments Peter
Fishing Partner: Jeff McGee from Kingston
Fishing Style (Fast or Slow): Peter feels, "fishing as slow as possible once the fish are found is key... which is hard to do with 3 and 4 foot waves. I'm trying to go as slow as I can."
Wining Lure: "Tube, the drop shot hasn't been great for me this week." reflects Peter 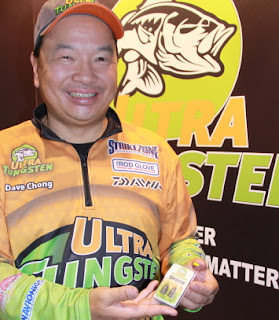 Dave Chong
(multiple winner with a win already this year; X-Zone co-owner/promoter; guide; fishing tackle rep; and old friend)
Fishing Partner: Joe Cutajar
Pre-fishing : "Not an enough!" jokes Dave. Only 2 days in the last  2 weeks.
Winning Weight : Dave says, "as high as always, probably in the  28 pounds plus range. Down form last year due to the weather. The tournament is a week earlier than last year and the Indian summer has prevented the fish from grouping up. A lot of fish are still suspended." He sums it up as, "The fish are in a weird funk."
Big bass?:  A 7 and change but not another 8. He would be shocked to see an 8.
Fishing Style (Fast or Slow):  Not fast but not slow. Dave says, "Kinda moderate, unless we get on a pod of fish. You'll have to cover a lot of water and put your bait in front of as many fish as possible."
Winning Bait? : X-Zone slammer.
Good Luck to both Dave and Peter!
Tune in for all the details along with a play by play of my annual trip for river smallmouth.
Posted by IBASSIN.COM at 9:50 PM