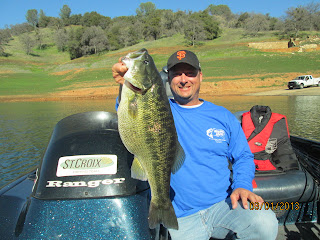 Richmond, CA - March 21, 2013 - When Oakdale, Calif. resident Randy Pierson went to New Melones Lake, nestled at the base of the Sierra Foothills east of Stockton on March 1, he had no idea he was what he was about to experience.
Pierson, a regular on the northern California tournament scene, a full-time gun accessory sales executive and part-time high school soccer coach would hook and land a 10-pound, 1-ounce spotted bass; which would be certified as a New Melones Lake record. The fish weighed just three ounces short of Bryan Shashido's 2001 world record spotted bass taken at Pine Flat lake.
The fish was taken on River2Sea's popular and effective S-Waver 168, a jointed "s-action" swimbait in the Lite Trout color pattern.

Pierson and his father Glenn, had gone to the lake in order to practice for a March 9 American Bass Association pro team event, and they were seeking to expand on a fishing pattern his father had located earlier in the week. after checking several locations on the lake, and catching three other keeper spotted bass - including a four and a half pounder - they stopped on a main lake point early in the afternoon, and that was when the bite happened.
"There was a slight ripple on the water from a breath of air, so I reached down and picked up the 6'8" St. Croix Legend Extreme rod that I had my S-Waver on and made a cast toward the bank," Pierson said. "I retrieved the S-Waver about 15 feet and the rod just loaded up, then the battle heated up."
Pierson said the battle lasted for nearly a minute, and when he and his father landed it, they knew it was a special fish. "I had caught a 7-pound, 11-ounce spot at Don Pedro in 2005; which was a lake record then, and I knew this was bigger," he said. "We weighed this fish, and later found out it was a lake record. It was an unbelievable feeling and an incredible fish."
He revealed that there were two spotted bass with his lake record when he caught it, an one of them was significantly bigger than his. "I'm still going to the lake whenever possible to try and get that fish," he revealed with a chuckle.
A week later, during the tournament, the Piersons finished fourth with a limit of spotted bass for a total weight of 23.02 pounds, a creel that included an 8-pound, 5-ounce spotted bass that would have eclipsed the previous lake record, had he not done it a week earlier. For more details of the catch, and additional pictures, see the story by Jody Only on The Examiner.
River2Sea continues to make waves on television, the pro tours, in fishing tackle retailers across the country; and now in record books. You can locate dealers that carry the S-Waver, and other information by visiting them on the Internet at www.river2seausa.com.
Posted by IBASSIN.COM at 1:00 AM