EUFAULA, Ala. – When Randy Haynes won the EverStart Series event on Pickwick Lake two weeks ago, it was hardly a surprise. After all, Haynes has five FLW wins on the Tennessee River and he knows just about every nook and cranny on the entire chain. But Haynes had never visited Lake Eufaula, part of the Chattahoochee River system. Initially it took some getting used to, but Haynes acquainted just fine.
The Counce, Tenn., pro is fishing his rookie season on the Walmart FLW Tour, but his experience and ability belie that of a seasoned veteran. Earlier in the week, Haynes spoke about the history of Eufaula as an offshore cranking lake, tipping his cap to pioneering anglers like David Fritts and Bobby Padgett. While the humble Haynes will never admit it himself, he’s beginning to enter that same rare territory.How good is Haynes offshore? Mark Rose, known as the ledge master on tour, largely credits Haynes with his offshore education and transformation.
While Haynes had identified six solid schools of bass on the mid-to-upper end of Eufaula, what bothered him all week was that he’d only catch a fish or two off each school. Thanks to cool spring, the numbers of bass just weren’t there yet, and while his weights were increasing each day, the possibility of stumbling on day four was real.
Haynes was eager to at least scratch out a limit this morning, and in a rush his timing got a little off.
“I was impatient with my rotation; I was trying just to get by and I was about an hour early today,” he explained. “I had three main spots, and I was rotating through them, giving them a few hours of rest before I would go back. I hit my spots three times per day and I was lucky to have sections of the lake all to myself.”
Over the course of the tournament, Haynes said roughly half his keepers came on Strike King 6XDs and 5XDs in citrus shad color. The other half came on a variety of swimbaits, and a few fell victim to a Strike King football jig or Carolina-rigged creature bait. The key water depth was six to 15 feet and oftentimes the fish would suspend off the front of the bars. While most offshore fishermen targeted brush and timber, Haynes fished hard rock. It was his belief that the shad were spawning on the tops of the rock ledges and occasionally he could even feel the shad nip and bump his baits. 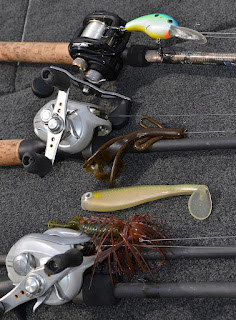 “It varied, but a lot of times the crankbait would fire them up and then I’d go back with the swimbait. Today I weighed one on the crankbait and four on the swimbait. Once the sun got up, it put those fish on top and they started eating.”
Haynes’ day-four sack officially weighed 16 pounds, 1 ounce. With a total of 73 pounds, 1 ounce, his winning margin was 11 pounds. The hardwood floor installer will take a $125,000 check with him back home to Tennessee.
“To win one of these events, everything has to line up just right. I was blessed. I’m so happy for my family and friends. There are so many people back home that I compete for, and against.”
Haynes concluded by calling Eufaula a special place – a fitting offshore venue for his first tour title.
“Back in its day, Eufaula was theplace. I started ledge fishing back in 1998. I decided I had to learn because nobody wins around the bank anymore. I don’t think I’ve hardly been back since.”
Thrift soars to second
After a subpar day three, Bryan Thrift made up some serious ground on day four – soaring from seventh to second via a 16-pound, 14-ounce limit. Thrift finished the week with a four-day total of 62 pounds, 1 ounce.
“I fished shallow for the first hour and a half this morning after only weighing in four little spots yesterday,” said the Chevy pro. “I caught one on a buzzbait, one on a swim jig and one skipping a jig under a dock. That kind of relaxed me as I went out to my deeper stuff.”
In practice, Thrift marked over 100 offshore spots, most of them small one-cast places in 8 to 15 feet that had either standing timber or brush. These spots were located anywhere from the mouth of Cowikee Creek all the way to the dam. Sunday, he caught a 4-pounder at his third offshore spot. Then he went to his next waypoint and caught another 4-pounder and a 3-pounder. At that moment, he thought it was game on, but received no other big bites the rest of the day.

“I was basically casting a swim jig. I’d throw it out, let it hit bottom and then start reeling. I’d put a swimbait on back as a trailer, either a Damiki Anchovy Shad or a Keitech 4.8.”
While most of his bites were random, he had one piece of standing timber that produced three quality fish during the week.
“Today was a good day; I don’t know why they didn’t bite yesterday. The rest of the days I was averaging eight or nine bites per day.”
Had they bit on day three, Thrift could have potentially made a run at Haynes. As it stands, he earned $35,000.
“Any time you weigh in four bass for just 7 pounds, you can’t be upset with second place. I didn’t really think I could move up this far. This is a nice surprise.”
Lucas retains third
After opening the tournament with a whopping 22-pound, 6-ounce stringer, Justin Lucas spent the rest of the week in scramble mode. With only three keepers on day two, he decided to start fresh and fish shallow. On day three he stumbled onto a pocket of spawning bass and caught 13 pounds, 10 ounces.
He started day four on a little bay off the main river with good bank grass. As he got nearby, he noticed the water had come up and the grass was more submerged. Instead of throwing a swim jig like he had been, he switched to a ChatterBait and immediately caught a 3-pounder. Minutes later he hooked up with a 4 1/2- or 5-pounder but the fish got off due to his drag being set too loose.
“She ate it good, it was my fault,” said Lucas. “Then I saw her open her mouth and the bait was gone; she spit it.”
After that, Lucas returned to his sight-fishing program down by the dam where he had two productive pockets. He started with a 5-pound female and a 4-pound female that were on beds. Ultimately neither kicker would bite. Yesterday he caught the accompanying males, but today new males had paired up with the big females.
“I saw 10 females on bed this week and I caught only one of them. It’s crazy; I can’t explain it. But the males were big too; they were almost 3 pounds. So I caught those, cruised around and caught another one and then finished the day back in the grass where I caught a couple more.”
Lucas’ day-four stringer weighed 13 pounds, 13 ounces, finishing the tournament with 61 pounds even.
“When I was sight-fishing I was using soft plastics with a drop-shot or a shaky head, nothing fancy. I did weigh some fish on a Tightlines UVenko. And on day one, I caught those big fish offshore on a Lucky Craft LC 2.5DD.”
While the crankbait caught quality, Lucas’ deep spot ultimately dwindled out.
“The problem with that second day is that I thought that offshore spot was better than it was and I wasted too much time.”
For third place, the California native and current Guntersville, Ala., resident earned $30,000.
“I’m stoked with third. As a newlywed, $30,000 is a lot of money.”
Dudley finishes fourth
Day four on Eufaula was a mental struggle for David Dudley. With Haynes having a 10-pound advantage on him, Dudley knew he’d have to fish deep to catch the kind of stringer needed for yet another comeback win. But every time he’d venture deep, he’d struggle to even get a bite. And every time he returned to the bank the bass would eat his wacky-rigged Yum Dinger.
“I just kept fighting mentally between shallow and deep,” said the three-time Angler of the Year. “I wanted to get out there and go after the ledge master, but I just couldn’t do it.”
Dudley caught some sight-fishing and others were probably spawning or guarding fry but he simply couldn’t see them. In addition, wolfpack bass surrounding bream beds were part of his shallow-water program. He used a mix of baits – from a Booyah Pad Crasher to wacky-rigged Yum Dinger to a swim jig and even a Rebel Pop-R. All of his baits were fished on prototype Lamiglas David Dudley Signature Series rods.
“I probably caught the most on the Dinger (green pumpkin purple) but every single one I caught on the Pad Crasher went to the scale. Now that I think back on it, the Pad Crasher was responsible for a lot of my big bites.”
Dudley’s five best keepers Sunday weighed 14 pounds, 4 ounces, giving him a total of 60 pounds, 12 ounces. For fourth place, the Castrol pro earned $25,000.
Blaylock rises to fifth
Each of the final two days, Stetson Blaylock caught identical 14-pound, 10-ounce limits and gradually rose to fifth with a cumulative weight of 59 pounds, 9 ounces. Like Lucas and Dudley, Blaylock spent all of his time shallow.
“Every bass I weighed this week came on a spinning rod, 10-pound Seaguar fluorocarbon line and a Yamamoto Senko,” said the Benton, Ark., native.
In practice, Blaylock identified two or three productive stretches of bank. On day one, he caught them in between the docks under cloudy conditions. But during the rest of the week, he caught them under and around the shady spots in the sunny weather.
“They say shallow fish don’t replenish, especially this time of year, but they really did for me this week. Every day I’d catch a good fish off the same dock.”
Blaylock’s week was repetitive, likely making over a thousand pitches to dock posts. But it also proved effective as he earned $20,000
“I just had confident in my pattern and I was doing what I like to do.”
Rest of the best
Rounding out the top 10 pros at the FLW Tour event on Lake Eufaula:
6th: Kelley Jaye of Dadeville, Ala., 59-6, $17,000
7th: JT Kenney of Palm Bay, Fla., 52-15, $16,000
8th: John Devere of Berea, Ky., 51-7, $15,000
9th: David Fritts of Lexington, N.C., 51-2, $14,000
10th: Scott Martin of Clewiston, Fla., 47-12, $13,000
The next FLW Tour event is slated for Grand Lake in Grove, Okla., June 6-9, the fifth of six qualifiers.
Posted by IBASSIN.COM at 4:10 AM