By Deb Johnson
BASS Press Release
Skeet Reese is on fire — again.
The Auburn, Calif., superstar of bass fishing was victorious Sunday in the Bassmaster Elite Series’ West Point Lake Battle after starting the final round in seventh place, almost 2 1/2 pounds behind leader Tommy Biffle.
But when Reese weighed 15-4 Sunday, he squashed the other 11 finalists’ hopes of winning the four-day Battle out of LaGrange, Ga. Closest to catching Reese was Aaron Martens of Leeds, Ala., who finished second with 44-6, exactly 2 pounds back.
Reese won $100,000 and his 14th Bassmaster Classic qualification. He also racked up points in the Toyota Bassmaster Angler of the Year race, rising eight steps in the standings into third place.
“We play for the win — and the money’s always nice. But I fish for one title — Angler of the Year. For me, it doesn’t get any better than that,” said Reese, who has won the AOY crown once, in 2007.
The West Point event win, the seventh of his Bassmaster career, was his first since he won two Elite competitions in 2010. He was in contention for the AOY title throughout 2010, but Kevin VanDam took it.

Then Reese’s streak stopped — until Sunday, that is, when as quickly as a kitchen match bursts into flame when scratched against a rock, Reese again was on fire.
He was not confident about success on West Point Lake, even up to the last minutes of the final weigh-in, drenched by a driving rain. He watched from the official Toyota Hot Seat as the other finalists weighed their bass.
“If they’re sitting out there,” Reese gestured to the crowd unsheltered from the rain, “I can sit out here.”
Soaking wet, Reese savored every minute of the win, at one point jumping up and down on the stage.
Reese talked later about his expectations going into the West Point event. 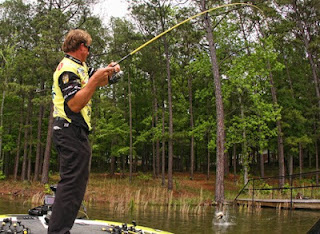 “I thought if I could win, I’d win on a swimbait,” said the California angler who often turns to that lure. “I couldn’t get a bite on a swimbait. I didn’t think I’d be picking up a spinning rod, but I adapted to conditions.”
In fifth place with 13-0 the first day, “I was excited. But on Day 2 it was back to reality. I had 9 pounds, just a normal limit. Yesterday, I had 8 1/2 pounds, and I didn’t think it would put me in the 12-cut,” he said.
It did. Saturday night he studied the Top 12 weights. He decided he had a chance.
“I saw how tight the Top 12 were,” he said. “I realized it was one of those tournaments wide open for any of the 12. I thought 15 to 16 pounds today would wind up winning it. Fortunately, I was the one who caught 15 pounds.”
Reese targeted bedding bass all four days, even trying for one large female several times before she seemingly disappeared.
Sunday he caught his first two fish of the morning on a Lucky Craft LV100 lipless crankbait, fishing shallow flats in the backs of ditches. Then he picked up a dropshot rig with a 4-inch smoke-purple Berkley Havoc Bottom Hopper. That yielded two more keepers.
“Then I went quite a while without a bite,” he said. “I tried for spotted bass, and it just wasn’t happening.” 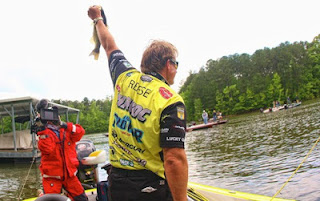 He checked on that big female again — no dice — so he fished banks. He boated a few more that went 2, 2 1/2 pounds. His total of 15-4 was the largest bag of the day, hands-down.
“I was just fortunate I had all decent fish today,” Reese said.
Martens walked away with second place for the 11th time in his Bassmaster career.
He lamented the loss Sunday of a 5-pounder about 12 feet from his boat. That was the bass that could have given him a win, he said. It broke off when the line wrapped around a tree.
“You have to have a flawless event to win one of these, and Skeet did,” Martens said.
Finishing third was Pete Ponds with 44-1. Ponds started in 24th place on Day 1, then hopped into 10th, and then into second. His 11-1 of Sunday wasn’t enough to overtake Reese, who got the better of Ponds by 2-5.
Fourth was Elite rookie Hank Cherry of Maiden, N.C., with 41-2, which included Sunday's largest bass, a 5-15. Fifth was Todd Faircloth at 39-1. Faircloth rose from 40th place on the first day to become one of the 12 finalists.
Day 3 leader Tommy Biffle of Wagoner, Okla., fell to 10th place after weighing one bass that went 1-5.
The Battle’s results did not bump Edwin Evers of Talala, Okla., off the top of the standings in the Toyota Bassmaster Angler of the Year race, but the mix under him changed. Seven-time Angler of the Year winner Kevin VanDam of Kalamazoo, Mich., moved up one tick from third place to be Evers’ closest challenger. A margin of just six points separates the two leaders.
The other three pros now within the first five positions in the AOY race are Reese, 14 points behind Evers; second-year Elite pro Chris Zaldain of San Jose, Calif., 26 points in back of the leader; and Casey Ashley of Donalds, S.C., also 26 points behind Evers.
Pros earn points according to their finishes at each of eight regular-season events. At the end of the season, the pro with the most points will win the $100,000 AOY award.
Bonuses Elite pros earned at the West Point Lake Battle:
* Carhartt Big Bass of the tournament, worth $1,000 plus another $500 for wearing Carhartt apparel: Biffle for his 6-12 weighed on Day 1.
* Berkley Heavyweight Award of $500 for the best five-fish limit: Keith Combs of Huntington, Texas for his Day 1 bag of 15-14.
* Toyota’s $1,000 bonus to the leader in the Toyota Bassmaster Angler of the Year points race: Evers, for the second consecutive event as No. 1 in the AOY standings.
* Luck-E-Strike Comeback Award of $500 to Hank Cherry, who achieved the biggest jump in the AOY standings, from 47th up to 22nd place.
* Power-Pole Captain’s Cash award of $500 to the highest finisher equipped with Power-Poles: Reese.
* Livingston Lures Leader Award of $500 for leading on the second day: Aaron Martens of Leeds, Ala.
The West Point Lake Battle will air on ESPN at 8-9 a.m. ET May 12 on The Bassmasters TV show.
The Elite Series travels this week to Montgomery, Ala., for the Alabama River Charge presented by Star brite. The four-day competition will begin Thursday at Montgomery’s Riverfront Park (200 Coosa St., Montgomery, AL 36104).
Posted by IBASSIN.COM at 1:30 AM