By John Neporadny Jr.
Bass Press Release
RIDGELAND, Miss. — Randall Tharp moved one step closer to achieving his goals for the Bass Pro Shops Central Open at Ross Barnett Reservoir. Catching a 13-pound, 4-ounce limit kept Tharp in the lead of the pro division with 29-4 and enhanced his chances of earning an Open triple crown by winning this tournament, qualifying for the 2014 Bassmaster Classic, and finishing atop the Central Open point standings. 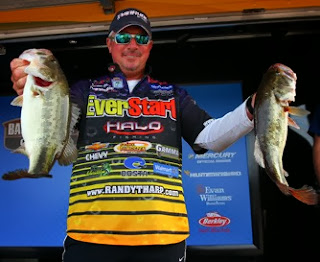 "My main goal is to win the points title and qualify for the Elites again," Tharp said. "I have caught a few fish before on Guntersville (the site of the 2014 Bassmaster Classic) and I sure would like to fish that Classic."
The St. Joe Beach, Fla., angler estimated that he caught about 10 keepers today, and about half of the fish bit after 12 o’clock. "It was a little slower for me this morning," said Tharp, who didn't think the 45-minute fog delay this morning hurt him. "Where I fished today was really foggy. I didn't start where I wanted to because I didn't think I could get there safely."

The touring pro thought the fishing throughout the day was more consistent than yesterday. "I did go some periods for an hour or an hour and a half without getting a bite, but when I got a bite it seemed like it really counted and, as the day progressed, my bites gradually got bigger, which was the opposite from yesterday. It really shut down for me yesterday about 11 o'clock, but today I caught two good ones late."
Texan Kente Kimura caught a 13-3 limit today to move up from sixth place into the runner-up spot with 27-05. "I had to make a lot of adjustments, but I caught pretty much everything on the same pattern," he said. "I had only one fish until noon today, so that kind of made me nervous. I tried some different things that didn't work so I went back to what I was doing." He believes the key to his pattern is timing and being in the right place in the afternoon when the bite is best for him.
Rounding out the top five in the pro division are Brian Potter, Claremore, Okla., third, 26-2; Gerald Spohrer, Gonzalez, La., fourth, 23-10; and Cliff Crochet, Pierre Part, La., fifth, 23-3.
A 7-9 three-fish limit boosted Will Major into the top spot of the non-boater division with 15-13. The Port Allen, La., angler had to fish some different water with his new partner, Timothy Fox, and he did just fine. "We went to a different area and a different type of fishing, but I stuck with my same baits," said Major. "My partner said he was on big fish. He asked me what I wanted to do all day, and I said, 'Let's go fish the big fish.'"
The Ridgeland Tourism Commission is hosting this open. Tomorrow's launch will be held at the Madison Marina on 115 Madison Landing Circle. The weigh-in will move to the Bass Pro Shops located at 100 Bass Pro Drive in Pearl, Miss., and will begin at 3:45 p.m. CT.
Posted by IBASSIN.COM at 7:47 AM