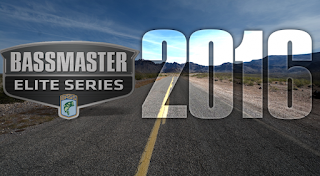 BIRMINGHAM, Ala. — Some of America’s top-ranked bass fisheries — plus a new wrinkle in tournament formats and an extra event — await the nation’s top professional bass anglers competing in the 2016 Bassmaster Elite Series. The lineup will take anglers to 10 fisheries in nine states, and it includes 10 Elite events, an increase from nine Elite tournaments in 2015.


The world’s premier bass tournament circuit kicks off in Tulsa, Okla., March 4-6, when the GEICO Bassmaster Classic presented by GoPro, widely known as the “Super Bowl of Bass Fishing,” unfolds on Grand Lake O’ the Cherokees.
Two weeks later, the Elite Series gets underway on Florida’s St. Johns River, a hugely popular stop for veteran professionals. From there, the circuit winds through eight more states before concluding in the $1 million Toyota Bassmaster Angler of the Year Championship in mid-September at a site to be announced later.

“We believe the 2016 Elite Series lineup of lakes is the best we’ve ever put together,” said Bruce Akin, B.A.S.S. CEO. “Our Elite anglers will find a lot to love about it, and we are expecting to attract new fans in new places this year. That’s the key to growing the sport.” Akin noted that the Elite Series has set new attendance records each of the past three years. The previous record of 128,600 from 2014 was shattered in August. With one event remaining in the season — the 2015 Toyota Bassmaster Angler of the Year Championship at Sturgeon Bay, Wisconsin — attendance for the season has already reached 156,765.

Most of the 2016 tournament destinations are included in the Bassmaster Magazine’s 100 Best Bass Lakes list for 2015.
Toledo Bend Reservoir on the Texas-Louisiana border was named the nation’s No. 1 bass lake this year. It will host Elite No. 5, May 12-15. Other top-notch bass fisheries include the St. Johns River (56th); Bull Shoals Lake, Arkansas (44th); Cayuga Lake, New York (61st); and the Mississippi River at La Crosse, Wis. (52nd).
Winyah Bay at Georgetown, S.C., where the Pee Dee, Black and Sampit rivers of South Carolina converge, appears on the Elite list for the first time, although B.A.S.S. club anglers fished it during the Old Milwaukee B.A.S.S. Nation Southern Divisional in April 2015. Big bass in that event weighed 7 pounds, 9 ounces.
Elite No. 3, to be held in April out of Mountain Home, Ark., will take place on two lakes — a first for Elite competition. The pros will alternate between two adjacent fisheries, Bull Shoals Lake, west of Mountain Home, and Norfork Lake, east of the host city. The full field of approximately 110 competitors will compete one day on Bull Shoals and the next on Norfork. The field will be cut to 50 for the semifinals on Bull Shoals, and then to the Top 12 for the final round on Norfork.
“This event will challenge the pros’ strategic decision-making during practice,” said Angie Thompson, vice president of events and sponsorship activation for B.A.S.S. “Bull Shoals and Norfork will fish very similarly, but the anglers will have to be strategic in how and where they practice for the two lakes.” As in most other Elite events, the anglers will have three days of “official” practice immediately preceding the competition.
The tournament will mark the first visit to Norfork for the Bassmaster Elite Series, which celebrates its 10th anniversary in 2016. Weigh-ins will be on the campus of Arkansas State University/Mountain Home, one of the most picturesque settings in the Ozarks.
Akin said special announcements are planned later for other events in 2016, including  the third annual BASSfest and the 2016 Toyota Bassmaster Angler of the Year Championship.
The popular marshal program, which permits fishing fans to ride along and observe the Elite pros during competition, will continue in 2016. Enrollment for B.A.S.S. Nation and Life members begins Dec. 1 online and Dec. 3 by phone. Registration for other B.A.S.S. members begins Dec. 8 online and Dec. 10 by phone. Entries will be accepted beginning at 9 a.m. CT each of those days.
Posted by IBASSIN.COM at 5:30 AM