BASS PRESS RELEASE
The 2017 Bassmaster Elite Series schedule features more exciting twists and changes than the world’s premier tournament circuit has seen in its storied 11-year history.
This year, Bassmaster has added a new stop on the circuit, the Toyota Bassmaster Texas Fest. The event, which will replace and build upon Toyota Texas Bass Classic’s decade-long legacy, is scheduled for May 17-21 on Sam Rayburn Reservoir, one of the hottest big-bass lakes in the United States. 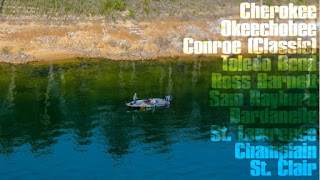 “Toyota Bassmaster Texas Fest will combine the best features of the Toyota Texas Bass Classic and our own BASSfest tournament — both of which have become immensely popular among anglers and fishing fans,” said B.A.S.S. CEO Bruce Akin. “Texas Fest will host a special Fan Appreciation Day offering anglers and their families opportunities to meet, greet and learn from the world’s best professional anglers.”

The Toyota Bassmaster Texas Fest will emphasize best practices in fishing conservation, including a catch, weigh and immediate release format. The event will also continue to benefit the Texas Parks & Wildlife Department (TPWD), which has been instrumental in introducing fishing conservation guidelines that have influenced fishing tournaments throughout the United States.
“Toyota has been a longtime supporter of fishing and conservation in Texas, and we know the partnership with B.A.S.S. will only bring those practices and our messages to a greater audience,” said Dave Terre, TPWD’s chief of fisheries management and research.
The Toyota Bassmaster Texas Fest will continue to follow the rules established in the Toyota Texas Bass Classic, including the use of on-boat marshals for weighing fish and the allowance of one fish over a designated size per angler to be brought in each day for public display and subsequent return to the lake. Only Bassmaster Elite Series anglers will be able to compete in Toyota Bassmaster Texas Fest, one of the qualifying events for the GEICO Bassmaster Classic presented by GoPro. The winner receives an automatic berth in the Classic.
“The Toyota Bassmaster Texas Fest is going to be a fantastic tournament that builds upon everything we’ve established over the past 10 years,” said Kelly Jordon, professional angler and co-founder of Toyota Texas Bass Classic. “Adding the B.A.S.S. organization to the existing event will benefit everyone involved.”
Also for the first time, the Elite Series schedule will include two events prior to the Classic. With the “Super Bowl of Bass Fishing” moving to March 24-26 at Lake Conroe outside of Houston, Texas, B.A.S.S. decided to conduct two Elite tournaments in February.

The schedule will open with the Elite Series’ first-ever visit to Tennessee’s Lake Cherokee, Feb. 9-12. Weigh-ins the first two days will take place lakeside, and the Saturday and Sunday weigh-ins will be held in Knoxville, Tenn., in the Convention Center. B.A.S.S. hasn’t visited Knoxville or the 28,780-acre lake in east Tennessee since the Bass Champs Invitational in 1981. The Visit Knoxville Sports Commission and the Jefferson County Chamber of Commerce are co-hosting the festivities.
“Visit Knoxville and its newly formed Sports Commission are thrilled to partner with Bassmaster for the first time at the Elite level,” said Kim Bumpas, president of Visit Knoxville. “We expect this tournament to bring thousands of attendees, while also featuring our destination on ESPN. The international exposure it will bring to Knoxville is tremendous. We are happy to host the anglers and their teams in our city. This is a great partnership, and we look forward to the tournament.”

After that, the touring pros will get a second Classic warm-up, Feb. 23-26, when the schedule shifts to Florida’s famed Lake Okeechobee. That fishery, nationally known for producing gigantic Florida-strain largemouth bass, last hosted an Elite Series event in 2012, when California pro Ish Monroe won with a four-day weight of 108 pounds, 5 ounces — the fifth-largest catch in trail history. The Okeechobee Tourist Development Council and the Board of County Commissioners are hosts.
“We are extremely excited to have the premier tour of professional fishing stop at the top of the lake and take in some of our Okeechobee hospitality,” said Sharie Turgeon, tourism coordinator, noting that Okeechobee celebrates its 100th birthday next year. “We are looking forward to being a part of professional angling history. What a way to celebrate our centennial!”
Anglers will then have a month to prepare for the Bassmaster Classic’s historic 47th renewal, with fishing taking place on another big-bass factory, Lake Conroe. Weigh-ins will be held in Houston’s Minute Maid Park, home of the Houston Astros.

Once the excitement of the Classic is done, the Elite Series schedule will resume April 6-9 with a return trip to Toledo Bend Reservoir on the Louisiana/Texas border. Superstar pro Kevin VanDam won there in May of this year; it was the first of his three victories so far on the 2016 Elite Series circuit. Toledo Bend is currently ranked as America’s No. 1 bass lake for the second year in a row, according to Bassmaster Magazine’s 100 Best Bass Lakes list.
“We expect this to be the most exciting time B.A.S.S. has ever experienced on Toledo Bend,” said Linda Curtis-Sparks of Toledo Bend Lake Country, host of the event. “Anticipation is already high to see what records may be set during the spawning season with the best fisherman in the nation at the No. 1 bass fishing lake in the nation. Louisiana welcomes them.”
Next up is the trail’s first stop in Mississippi. Elite No. 4 is scheduled for April 27-30 on Ross Barnett Reservoir in Ridgeland, Miss. The 30,000-acre fishery was ranked ninth in the Southeastern Division by Bassmaster this year.
“The Ridgeland Tourism Commission in partnership with the Barnett Reservoir is delighted to have been chosen as one of the 2017 Bassmaster Elite Series host cities and looks forward to hosting anglers and attracting event spectators to our city and Mississippi,” said Mary Beth Wilkerson, executive director of the Ridgeland Tourism Commission. “Another exciting aspect of hosting such an event is the media exposure it will bring to our area to showcase the outstanding fishing and outdoor opportunities offered at the Barnett Reservoir and in our city.”
After leaving Mississippi and completing the Toyota Bassmaster Texas Fest at Sam Rayburn Reservoir, the Elite Series will visit Lake Dardanelle in Russellville, Ark., June 2-5. Unlike other Elite events, this one runs Friday through Monday to accommodate anglers’ travel plans over the Memorial Day weekend. The Elite Series’ last visit to Dardanelle produced Oklahoma pro Jason Christie’s fourth career B.A.S.S. victory. The Russellville A&P Commission is the host organization.
“I don’t know how you can look at this schedule and not be excited,” said B.A.S.S. Tournament Director Trip Weldon. “We’ve got a good mix of familiar fisheries — places we’ve visited several times the past few years — and some lakes that we haven’t been to in a while.
“We’re even going to a couple of new spots. That’s especially exciting.”
From Arkansas — with the July heat starting to take hold — the Elite Series will swing north, with back-to-back events in New York.
The first will be July 20-23 on the smallmouth-rich waters of the St. Lawrence River in Waddington, N.Y., host city for the tournament.
It will be the third trip for the Elite Series to the river that separates the eastern United States and Canada, and the first two were overwhelmingly popular with fans in that region. The first event there, in 2013, drew an all-time Elite Series record of 34,100 fans, and the second trip, in 2015, drew 31,600 — a total that ranks fourth all-time on the trail.
“Waddington, the smallest village ever to host a Bassmaster Elite event, is again ready to set new attendance records!” said Bob Giordano, host committee chair for the Village of Waddington. “Come join us on the banks of the mighty St. Lawrence River in upstate New York. It's where the world comes to fish.”
Immediately after Waddington, the Elites will move east to Plattsburgh, N.Y., for an event on Lake Champlain, July 27-30. Though Champlain has been a regular stop for Bassmaster Opens, it hasn’t played host to an Elite Series tournament since 2007, when Alabama pro Tim Horton won with 83-10. The Adirondack Coast Visitors Bureau is host.
The Elite Series will complete its northern swing — and its regular-season slate — by traveling to Lake St. Clair, Aug. 24-27. Macomb County, just north of Detroit, Mich., will host the Elite event on the 430-square-mile fishery. St. Clair was ranked No. 1 in the nation on Bassmaster’s 100 Best Bass Lakes in 2013 and was last visited by the Elite Series in 2015.
Details about two special Elite events — the Toyota Bassmaster Angler of the Year Championship and the Bassmaster Classic Bracket Tournament — will be announced later.
Posted by IBASSIN.COM at 3:30 AM