Evergreen International Co., Ltd. and Brett Hite to launch the most premium
ChatterBait lure ever built in conjunction with the
2017 GEICO Bassmaster Classic
Z-Man Fishing Products, manufacturer of Original ChatterBait® brand bladed swim jigs and 10X Tough ElaZtech® soft plastics, is pleased to announce the release of its next game-changing bait—the new ChatterBait Jack Hammer custom bladed jig—on March 24th at the Bassmaster Classic Outdoors Expo. A free, open-to-the-public event that showcases the latest and greatest in fishing and outdoor products, this year’s Expo will be held at the George R. Brown Convention Center in Houston, TX.

As with its ChatterBait Freedom™ release at the 2016 Bassmaster Classic, the ChatterBait Jack Hammer reflects Z-Man’s willingness to partner with another forward-thinking tackle company—in this case, leading Japanese lure maker Evergreen—to offer anglers more bladed jig options based on its patented, tournament-winning design. Built in Evergreen’s factory, the Jack Hammer will be marketed and distributed exclusively by Z-Man in the United States. 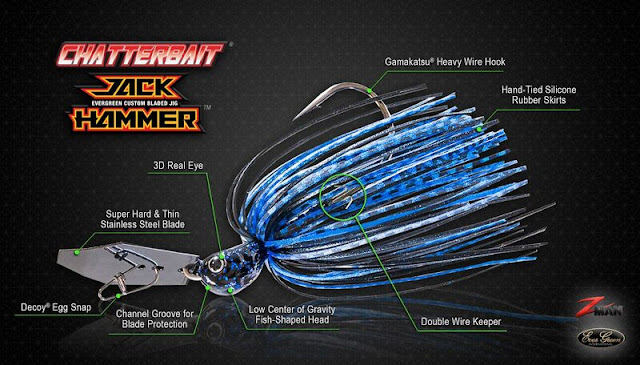 The latest example of Z-Man’s commitment to continually evolving, improving, and expanding a bait that’s unmatched in its ability to deliver a crankbait action, jig profile, and spinnerbait flash, the ChatterBait Jack Hammer raises the bar on premium construction and detail, yet again. Built around a heavy duty black nickel Gamakatsu® flipping hook, the Jack Hammer’s head shape—equipped with lifelike 3D eyes—facilitates a low center of gravity for balance and easy skipping. It also touts a super-strong, snag-resistant Decoy® Egg Snap line tie, and hard and thin, stainless steel hexagonal ChatterBlade®. Additionally, its dual-wire trailer keepers hold all types of soft plastic trailers more securely than ever before. To round things out, the Jack Hammer features hand-tied silicone skirts in patterns that have been personally designed and selected by ChatterBait pro and bladed swim jig guru Brett Hite, in addition to highly detailed, color-matched head and blade paint schemes.


“Two-and-a-half years ago, we set out to produce the best bladed jig the fishing industry had ever seen,” Hite exclaims. “Simply put, I wanted a bait that would run better and feature superior components, and the Jack Hammer over-delivers on both fronts. It vibrates instantly, skips and swims unbelievably, and holds up to the rigors of tournament-level fishing better than any other bladed jig I’ve fished. I’m super excited to be working closely with Z-Man and Evergreen on this unbelievable bait, and am confident the Jack Hammer will help boost my tournament performance and earnings, as well as help anglers of all skill levels boat         more fish.”

“In addition to being perhaps the most proficient bladed jig fisherman on the planet, Brett is one of the most meticulous pros I’ve met when it comes to lure design,” remarks Z-Man President, Daniel Nussbaum, in describing the company’s newest world-class Pro Staff addition. “When combined with the attention to detail that goes into Evergreen’s manufacturing process, the result is a bladed jig that is truly second to none in terms of quality, performance and construction. The ChatterBait Jack Hammer is an ultra-premium bait that all serious bass anglers will definitely need in their tackle boxes.”

Seiya Muto, Senior Manager of Evergreen’s Business Division, adds, “We are extremely grateful for the opportunity to collaborate with Z-Man on the ChatterBait Jack Hammer. Having been painstakingly developed, tested, and fine tuned over the last several years by Brett and Evergreen pro, Morizo Shimizu, both anglers have provided invaluable insights into the Jack Hammer with the goal of making it absolutely perfect—as well as a go-to bait for performing at the highest level in the sport’s pinnacle tournaments. We’re confident that the world’s top anglers will rely on this bait in the coming years, and that anglers of all skill levels will be able to achieve similar success, as well.”

Offered in 3/8- and 1/2-ounce weights, and 10 amazingly lifelike color patterns, the ChatterBait Jack Hammer will retail for $15.99.