Gunning for 2nd win this season 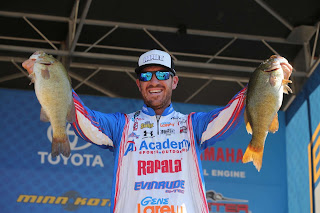 BASS PRESS RELEASE
The second round of the Bassmaster Elite at Lake Champlain presented by Dick Cepek Tires & Wheels dawned with clear, high skies and still-as-glass conditions. Jacob Wheeler of Indianapolis, Ind., took advantage and boated a 20-pound, 12-ounce limit of smallmouth bass, which catapulted him 29 spots up the leaderboard to first place with one day left to fish. His two-day, 10-fish total is 38-8.

Wheeler’s story is remarkable not only because of his dramatic movement up the standings, but also because he did it with smallmouth. Although Champlain is a legendary smallmouth fishery, tournaments here, when held in late July and early August, are traditionally won with at least some largemouth. Even second-place Seth Feider, a smallmouth specialist, is targeting largemouth, and he weighed four of them today.

“Obviously it was a heck of a day,” Wheeler said. “I caught about 50 bass today and had the fish on to have a legitimate 22-pound bag of smallmouth. I think there’s 20 more pounds in that same area. This lake is phenomenal. You just can’t beat a lake where you can catch 20 pounds of smallmouth.”


Wheeler added that he’s fishing “isolated little places” and he’s only catching fish off places where he can see baitfish on his graph.

Feider, of Bloomington, Minn., weighed 19-15 today and improved 30 spots to second. His two-day weight is 37-8 — exactly 1 pound off the lead pace. Feider said his plan was to fish smallmouth for the tournament, but conditions forced him to adjust and also pursue largemouth.

“This lake runs north to south, and it’s deep, so there’s a ton of current that affects the fish,” Feider said. “When you get a north or south wind, you get that current, and that helps the smallmouth bite. An east or west wind, or light wind, hurts it. We didn’t have wind this morning, so I decided to go for largemouth.”

Three anglers are currently tied for third place with 37-7 — Brandon Lester of Fayetteville, Tenn., Steve Kennedy of Auburn, Ala. and Matt Lee of Guntersville, Ala.

Kennedy has weighed smallmouth exclusively. “I started on largemouth down at Ticonderoga in practice, like I always do here, but things didn’t seem right to me — there was an entire size of fish that just seemed to be missing. So I moved back up the lake and pretty quickly found what I was fishing today. At one point, I couldn’t get my bait to the bottom — the fish were hitting on every cast.”

Hayden, Idaho, pro Brandon Palaniuk is in 10th place with 36-14 and still leads the Toyota Bassmaster Angler of the Year race. Tournament leader Wheeler, however, is chasing and is now second in the points race, pending the final results of this event.

“I wasn’t thinking about the points at all today,” Palaniuk said. “I don’t let points tell me how to fish. I don’t even know what the gap is — all I know is that I’m still leading, because people tell me.”

The weather-shortened event concludes Sunday, after three days of fishing. The Top 51 anglers on today’s leaderboard advance to fish tomorrow.

Anglers launch Sunday from the City Marina in downtown Plattsburgh at 6:15 a.m. ET. Weigh-in begins at 3:15 p.m. at the Plattsburgh City Beach.
The event is hosted by the Adirondack Coast Visitors Bureau and the City of Plattsburgh.
Posted by IBASSIN.COM at 8:42 PM