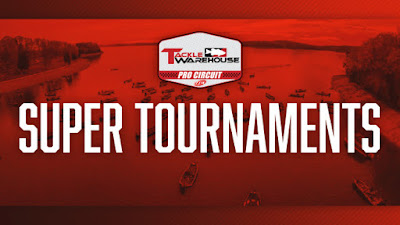 
Though the 2020 tournament season will surely be remembered for the weeks that anglers spent off the water while waiting out the COVID-19 pandemic, today FLW is rolling out major changes to the remainder of this season’s Tackle Warehouse Pro Circuit that will result in some of the most memorable professional bass tournaments in history once everyone returns to competition.
Among the changes, the organization has extended an invitation to Major League Fishing’s pro anglers to join the Tackle Warehouse Pro Circuit for three newly created “Super Tournaments” that include an expanded roster and higher payouts. The Super Tournaments are made possible by the abbreviated schedules announced recently by MLF and FLW.
Because both organizations’ seasons have been cut short due to the timing of television production schedules and COVID-19-related schedule interruptions, FLW’s invitation to join together provides additional opportunities for pros who choose to participate.
All Pro Circuit anglers will retain their spots on the roster, but the field size will be expanded to include any MLF pros that commit to competing in all three events. MLF Pros have been given until May 15 to indicate their intent to fish, which means the roster could be final as soon as May 16.
While the total number of anglers is yet to be determined, the boost in entry fees paid by the MLF pros, plus an extra investment from the League, could result in tournament payouts of approximately $3.8 million through three events (a $1.37 million increase), depending on field size. Assuming a 200-boat field, 50 percent of the anglers will earn at least $10,000 at every tournament. Along with increased payouts, FLW will deliver an expanded four-day FLW Live on-the-water broadcast.
These changes aid anglers as they look to not only overcome the challenges caused by COVID-19, but to create even greater interest in the tournaments among fans. Without question, the 2020 Super Tournaments will feature the most accomplished roster of anglers currently competing in a five-bass-limit tournament format.
Schedules below
“It’s an understatement to say that these are historic times in professional bass fishing, but that’s exactly what we’re dealing with – a situation our industry has never faced before,” says FLW Executive Vice President and General Manager Kathy Fennel. “As we discussed how FLW should emerge from the quarantine period, we realized that we could work together with MLF to give both organizations’ anglers even better opportunities to earn money and represent their sponsors.

“The League is injecting a substantial sum of money into the Pro Circuit to make this possible, as well as adding additional live-streaming content. We’re going to give fans an incredible show, with the best anglers in the world fishing for five-bass limits. FLW and MLF will come out of quarantine even stronger.”

The 2020 Tackle Warehouse Pro Circuit regular-season schedule has been shortened from seven events to six, with three Super Tournament events remaining to contest. The Super Tournaments have been scheduled on bodies of water at times of year that will allow an approximate 200-boat field to enjoy the best quality of fishing possible. FLW spaced out the tournament dates to make it easier for anglers to participate in every event, while also eliminating the off day between practice and the tournament to reduce time away from home and overall expenses.
The remaining schedule is as follows:
Regular-season Super Tournaments
June 23-26 – Lake Chickamauga in Dayton, Tenn.
July 29-Aug. 1 – Mississippi River in La Crosse, Wis.
Aug. 11-14 – Detroit River in Trenton, Mich.

Tackle Warehouse TITLE, the FLW Pro Circuit Championship
Aug. 24-29 – St. Lawrence River in Massena, N.Y.
AOY STAYS THE SAME
Only the original Tackle Warehouse Pro Circuit anglers will continue to compete for the Angler of the Year title throughout the remainder of the season. AOY points in the final events will be awarded based on where Pro Circuit anglers finish among one another (e.g. the top-finishing FLW pro will receive “first-place points” regardless of where he finishes in the overall standings, etc.), and they’ll be added to points previously earned this season.
Qualification into the Tackle Warehouse TITLE, the FLW Pro Circuit Championship, is also open only to the original Pro Circuit field based on where anglers finish in the season-long point standings. The TITLE will remain a six-day, MLF-style catch-weigh-release tournament.
MLF pros that choose to compete in the final three Pro Circuit Super Tournaments will fish for prize money only. They’ll receive no points toward any championship or other title.

For fans, the Tackle Warehouse Pro Circuit Super Tournaments will offer the chance to see major stars from MLF competing in the traditional five-bass format against FLW’s top pros. It’s a huge opportunity, and FLW plans to deliver some serious media coverage through an expanded live on-the-water broadcast. FLW will stream all four days of the Super Tournaments, instead of only the final two days. The on-the-water camera crew will also be expanded to help capture more of the action.

Ultimately, the point of joining forces to finish the season is to not only bring professional tournament fishing back after quarantine, but to deliver a level of excitement that supersedes what we all enjoyed before.
“We’re working together, and if this solves a problem and makes MLF and FLW stronger, that’s only going to do better things for everyone, from the high school level up,” says Stefan. “The other huge benefit, in my opinion, is this is what I think the fans want. They want to see the biggest names of the sport all competing in one circuit, and that hasn’t happened in a while. I also think there are a lot of fans out there that want to see the big-name superstars come and fish five-fish tournaments again and see how they hold up. As a pro angler, I look at it as a huge opportunity.”