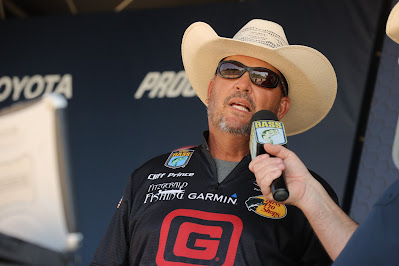 QUITMAN, Texas. — Early success gave Cliff Prince the comfort and confidence to look for the big bites he needed to amass an eye-popping Day 1 limit of 32 pounds, 5 ounces that leads the Simms Bassmaster Elite at Lake Fork.

“I had one place when I was working my way to the back of a pocket, and I caught 25 to 26 pounds off of that spot by about 9:30,” Prince said. “I caught everything I had off that first spot in about 20 minutes.

“I caught 10 fish there and they were still biting when I left.”

Knowing he had positioned himself well, Prince transitioned to a more aggressive strategy. Essentially, he became more discerning, as he sought quality over quantity.

Crowding throughout the lake, plus a strong Southwest wind blowing 15 to 20 mph, compelled him to remain in the creek where he started and diligently seek its greatest potential.

“Having 25 pounds early allowed me to go find what I found this afternoon,” he said. “I wasn’t in a hurry to go anywhere because I knew the wind was going to wipe out a lot of the stuff. I knew (big fish) live in that creek, and I knew it was the right place to be.

“I fished around in that area and tried to find something else and, late this afternoon, I tried to duplicate (my morning spot) and I ran across two other points that had some fish. On the second one I fished, I caught two 7-pounders. That’s what made the difference.”

Prince was understandably lean on details, but he did note that his morning and afternoon spots shared similar features. A particular type of bottom and specific positioning in the creek were key to his success.

Most of Prince’s bites came in 4 feet of water. Locating fish with his electronics helped him make the targeted casts that hit the right zone.

Prince said he caught a couple of keepers on a Carolina rig, but all of the bass he weighed bit reaction baits. He had two main baits — one with a moderate pace and the other, a faster presentation.

“The bigger fish like the faster bait better,” Prince said.

With Fork’s water level about 5 feet below normal pool, the lake’s fishable area has shrunk considerably. This definitely worked in Prince’s favor, as he found feeding competition whipping the concentrated fish into a frenzy.

“I used my Garmin Panoptix to see them,” Prince said. “Once you found where they were sitting, you could catch them. If they were there, they’d bite.”

Livesay is in second place with 32 pounds. While he fully expected to do most of his work in the 8- to 14-foot range during the afternoon period, Livesay ended up catching all of his weight around timber in the 18- to 25-foot range.

Fishing a 6th Sense Crush 300DD crankbait, a 6th Sense Divine Hybrid jig with a Netbait Paca Craw and a Hawg Caller Magnum Shaky Head with a 10-inch straight tail worm, Livesay anchored his bag with a 7-12. Once he reached 32, Livesay spent the rest of his day trying to find a bigger bite

“I needed a couple of 7-pounders to push my weight higher; I wanted to be closer to 35,” Livesay said. “I got lucky and caught some bigger fish than I thought I would on those mid-depth spots. I just had a good morning.

“After that, I went and looked at a bunch of other stuff, because eventually, I’m going to run out of fish. I left a bunch of fish biting in that mid-depth because I didn’t think I was going to catch the 7- to 8-pounder I needed.”

Gerald Swindle of Guntersville, Ala., is in third place with 29-7. Patience and persistence proved essential for the two-time Elite Series Angler of the Year, who struggled to find a fishable spot much of the day.

“I spent a lot of gas trying to get on two spots — those were the only two I could fish,” Swindle said. “At one point, I spent an hour and five minutes running and never stopped and got on a place.

“I ran around a bunch and I knew it was going to be that way because I had a really late boat draw. Some of the spots are so small, even if someone tells you that you can (fish a spot they’re fishing), you can’t make the right cast.”

When Swindle finally found a spot he could fish, he caught his weight on crankbaits, jigs and big worms. Targeting a hard spot amid standing timber, he used his Garmin LiveScope in conjunction with Humminbird 360 to locate the right targets and monitor fish positioning.

Gary Clouse of Winchester, Tenn., is in the lead for Phoenix Boats Big Bass honors with an 8-10 largemouth.

Prince is currently in the lead for the VMC Monster Bag.

Brandon Palaniuk of Rathdrum, Idaho, leads the Progressive Insurance Bassmaster Angler of the Year standings with 436 points. John Cox of DeBary, Fla., is in second with 429, followed by David Mullins of Mt. Carmel, Tenn., with 416, Drew Benton of Blakely, Ga., with 367 and Clifford Pirch of Payson, Ariz., with 367.