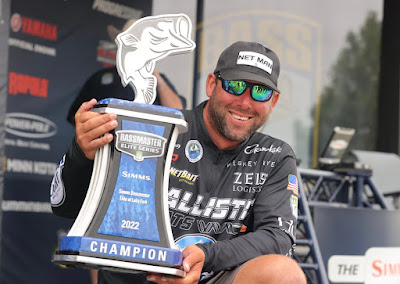 Lee Livesay of Longview, Texas, has won the 2022 Simms Bassmaster Elite at Lake Fork with a four-day total of 113 pounds, 11 ounces. (Photo: BASS)

QUITMAN, Texas — Lee Livesay definitely expected to do well; he just never expected his second consecutive victory on his home waters to be fueled by a “junk” spot.

But that’s exactly what happened, as the Longview, Texas, pro turned in a four-day total of 113 pounds, 11 ounces to win the Simms Bassmaster Elite at Lake Fork.

Livesay caught 32 pounds on Day 1 and finished just 5 ounces out of the top spot. A second-round limit of 28-10 then gave him the lead with a 4-pound margin over Brandon Palaniuk of Rathdrum, Idaho.

Livesay added 27-5 on Semifinal Saturday and entered Championship Sunday with a 3 1/2-pound advantage over Palaniuk. Then his final limit of 25-12 sealed the victory and pushed him past Palaniuk and Gerald Swindle of Guntersville, Ala. — both with 102-2 — by a margin of 11-9.

“This week is the most stressful week ever for me because I want to do good for every single person in this crowd that supports me — friends, family, sponsors, everybody,” Livesay said. “This place is special to a lot of people, but it’s special to me because it’s home.

“It’s hard to win on your home lake, but I’m a very blessed man.”

It marked the third Elite title for Livesay, who won at Lake Fork in 2021 and Chickamauga Lake in 2020. In addition to the $100,000 first-place prize, Livesay claimed his second Century Club belt for breaking 100 pounds in a four-day event. His first was for last year’s Lake Fork winning total of 112-5.

Despite intimate Lake Fork knowledge earned through a lifetime of fishing and several years of guiding, Livesay lamented a tough tournament. The lake is down 5 1/2 feet for dam repairs, so many of the spots he fished last year were inaccessible, if not high and dry.

With several of his fishable areas failing to impress, Livesay turned to an unlikely option that ended up producing much of his weight. Located on the west side of the Lake Fork Creek arm, Livesay’s main target comprised a 40-foot by 40-foot high spot reaching into nearby timber in about 13 to 17 feet of water.

Devoid of cover, the spot had a hard bottom where large gizzard shad were congregating. Big bass would periodically pull up to feed and when they did, Livesay could expect aggressive bites.

“I caught every fish today and every one but one yesterday on a spot I found in practice that I never looked at in my life,” Livesay said. “I’ve covered every piece of water on this lake a million times over and that’s what’s crazy. I didn’t catch anything where I normally do.”

Locating this spot was more by default than intent. Nevertheless, Livesay is thankful he found it.

“I only went looking (for new spots) because the first day of practice there was another tournament here and I didn’t want to be seen on anything good. I just went looking at junk and junk turned into 100 grand.”

Livesay anchored his final limit with an 8-3 at 2:38 p.m. He caught most of his Day 4 bass on a 3/4-ounce 6th Sense Divine Hybrid Jig with a Netbait Paca Craw and a Hog Farmer Magnum Shaky Head with a Netbait C-Mac worm. His biggest fish ate a 5-inch 6th Sense Flutter Spoon.

He became the 14th angler with three Elite wins and the fourth to win Elite events in three consecutive seasons. Livesay, 36, is also the second youngest (behind Palaniuk) to reach his third Elite title.

It all happened for the Texas pro less than a month after he won his first St. Croix Bassmaster Open presented by Mossy Oak Fishing at Ross Barnett on April 30.

Palaniuk, who turned in daily weights of 26-9, 30-1, 27-13 and 17-11, earned his first Century Club belt. Spending his tournament on two main spots in the lake’s lower basin, he targeted shallow points in 10 to 25 feet. The less-obvious spots were his preference.

“These were places that I somehow managed to have to myself that didn’t have any pressure,” Palaniuk said. “I think that allowed those fish to set up and stay there. They weren’t constantly getting beat on, so I could kind of cycle back and forth and get those bites.”

Palaniuk caught most of his fish on a Rapala DT-16 and a flutter spoon.

For much of the tournament, Swindle caught his fish by working a Zoom Magnum Trick Worm on a 3/4-ounce shaky head amid trees in the Lake Fork Creek arm. When that bite fizzled on Day 4, he transitioned to flipping a 1/2-ounce Boss jig with a Zoom Z-Craw trailer.

Swindle had earlier noticed bream rising to eat bass fry next to timber, so he tipped the trailer in chartreuse dye to match the panfish tails. After catching a limit this way, he upgraded with two bass — one a 6-13 — by fishing a big worm over a bream bed.

Late in the day, Swindle was stuck at 99 pounds, 15 ounces when he stopped on a dock en route to the weigh-in. With about 12 minutes left, he swam the Boss jig down the dock perimeter and caught a 4-pounder that pushed him over 100.

“That was the only jig that I had in my hand so I just threw it over there and started swimming it,” he said. “I was running by that dock and my gut was telling me ‘Do it, do it, do it,’ so I turned around and went back to it. If nothing else, it’s a reinforcement to always trust my gut.”

Palaniuk leads the Progressive Insurance Bassmaster Angler of the Year standings with 442 points. John Cox of DeBary, Fla., is in second with 422, followed by David Mullins of Mt. Carmel, Tenn., with 401, Drew Benton of Blakely, Ga., with 381 and Brandon Lester of Fayetteville, Tenn., with 377.

The Simms Bassmaster Elite at Lake Fork is being hosted by the Sabine River Authority and Wood County Economic Development Commission.