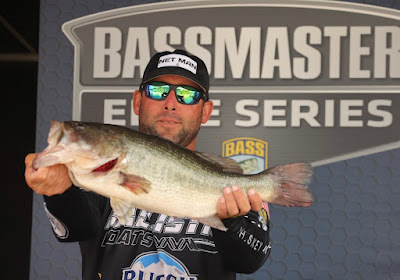 Lee Livesay of Longview, Texas, is leading after Day 3 of the 2022 Simms Bassmaster Elite at Lake Fork with a three-day total of 87 pounds, 15 ounces. (Photo: BASS)
BASS PRESS RELEASE

QUITMAN, Texas — Despite a lifetime of fishing Lake Fork and several years of guiding on the East Texas powerhouse, Lee Livesay found something he’d never seen before and that revelation delivered a Day 3 limit of 27 pounds, 5 ounces that kept him atop the Simms Bassmaster Elite at Lake Fork with a three-day weight of 87-15.

Livesay heads into Championship Sunday with a 3 1/2-pound advantage over Idaho superstar Brandon Palaniuk — and he credits much of his success to that new discovery.

“Most of the fish I’ve caught this week have come from a spot I’ve never even caught a bass on,” said Livesay, who won his first St. Croix Bassmaster Open presented by Mossy Oak Fishing at Ross Barnett on April 30. “I found them the first day of practice and thought they were little, but they grew. I got lucky yesterday and got an 8-pounder on another spot where it was just her.”

Livesay knows Fork intimately, but the spot he’s leveraging this week was so unassuming that it had never caught his eye. During practice, another tournament crowded the lake’s diminished waters — the lake level is down 5 1/2 feet for dam repairs — so Livesay searched for less obvious spots.

“I went looking at off-the-wall stuff I’d never looked at,” he said. “When I found them, I thought they were catfish. I came back the second day of practice and caught two under 4 pounds.

“I kind of wrote it off because usually a big one will bite before the little ones. But I went to it (during the tournament) and caught most of my bag there yesterday and all but my biggest one there today.”

Livesay described his spot as a small point reaching into the standing timber with a high spot. That 30-foot by 30-foot section has hard bottom where bass pull up to feed.

While the first two days saw Livesay catching fish early and securing all of his weight by late morning, Saturday kept him waiting until 9:15 a.m. for his first keeper. Another difference: Livesay couldn’t find the big afternoon bites the first two days, but he caught an 8-2 Saturday shortly after noon.

That kicker came off a deep point that was loaded with white bass — a common forage for Lake Fork giants.

Livesay caught all of his bass on a 6th Sense Divine Hybrid Jig with a Netbait Paca Craw.

Palaniuk caught 26-9 on Day 1 to place eighth before adding a second-round limit of 30-1 — his first limit of 30-plus in Bassmaster competition — to rise to second. His Day 3 bag of 27-13 gave the former Bassmaster Angler of the Year a total of 84-7.

“Yesterday, I had a major flurry; today I just didn’t,” Palaniuk said. “The fish were moving around a lot, they wouldn’t stay in my places and really set up.

“I would have thought that with today’s lighter wind, they would have hunkered down, but with less wind, the bait’s probably moving differently, it’s not pushed up against there and the bass just moved with the bait.”

Returning to the same spots in the lake's lower basin where he fished the previous two days, Palaniuk caught his bass over hard bottom with a variety of Rapala crankbaits and a big spoon.

Swindle said the key to surging ahead Saturday was switching locations and baits. He spent the majority of his day flipping a Zoom Magnum Trick Worm on a 3/4-ounce shaky head amid trees in the Lake Fork Creek arm. With more than half his day gone, Swindle relocated to a point in 25 feet of water and picked up a deep-diving crankbait.

“I left that area and I had about 26 pounds; I’d done all I could do and I guarded it a while to make sure they didn’t keep biting,” Swindle said. “At noon, I was convinced they were not going to bite the rest of the day, so I went and checked one more point.

“I graphed the point and (the fish) that were there the second day of practice hadn’t been there in the tournament, but I pulled in there today and I’m like, ‘Well, there they are.’ I caught a 6-4 and a 5-6 off of it. I caught two more 4s and a 3 that wouldn’t help me.”

Notably, Swindle had just switched to a lighter-action rod prior to catching his 5-6. That fish was hooked in the top of the head — a common occurrence with treble-hook baits — and the new rod’s flexibility allowed him to finesse it to the boat without popping the hook loose.

Day 1 leader Cliff Prince of Palatka, Fla., leads the race for VMC Monster Bag with his 32-5 limit from Day 1.

Palaniuk leads the Progressive Insurance Bassmaster Angler of the Year standings with 442 points. John Cox of DeBary, Fla., is in second with 422, followed by David Mullins of Mt. Carmel, Tenn., with 401, Drew Benton of Blakely, Ga., with 381 and Brandon Lester of Fayetteville, Tenn., with 377.

The Top 10 remaining anglers will take off at 7 a.m. CT Sunday from SRA Headquarters — Lake Fork. The weigh-in will be held at the same location at 3:10 p.m., with the winner earning $100,000. Coverage will be available on Bassmaster.com and the FOX Sports digital platforms. FS1 will also broadcast live with the tournament leaders beginning at 7 a.m.