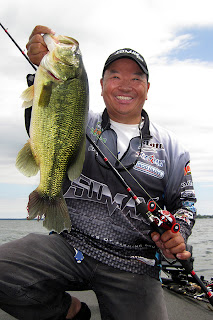 Exclusive Canadian Distributor for Charger, Playcraft, and Hampton Boats, Dale Minicola of Marine Central, announced today that David Chong, the Aurora Ontario tournament pro and fishing personality, has made the move to Charger Boats. “David’s name is synonymous with bass fishing in Ontario. He performs at the elite level, involves himself in community and children’s initiatives, and is a true ambassador to the sport,” states Minicola. Chong will be fishing in the Renegade Bass Tour, CSFL Bassmania, Kingston Canadian Open of Fishing, Berkley B1, and the Simcoe Open – amongst others – in a Charger 797 and Yamaha 250 SHO.
“After running a Ranger for 17 years, my Charger is going to be compared to one of the best makes of bass boats on the market. But after meeting Vice President Joe Dorris, visiting the Charger plant, and test driving various models, I am fully confident that my 797 will live up to my every expectation. Dale Minicola’s drive and commitment to making Charger Boats a success here in Canada is another vital component in my decision to sign with the team. Best of all, Charger Boats have a long standing reputation for being fast, stable, and a great handling boat in big water – of which there is no shortage of up here in Canada,” states Chong.
Among his accomplishments, Chong has 25-plus tournament wins to his name, has been crowned “Angler of the Year” and “Team of the Year” multiple times, and is a published outdoor writer, guide, charity host, and much sought after seminar presenter.
Charger Boats have been producing some of the most durable and fishable boats on the water for more than 30 years. Manufactured in Richland, Missouri, they are now available for the Canadian market through Marine Central, the Exclusive Distributor.
For More Information Contact:
Marine Central – Kingston Ontario, Canada
Phone: 613-376-6890
Website: www.marinecentral.ca
Website: www.chargerboats.com
Posted by IBASSIN.COM at 4:40 PM