By I.M. Bradley
How would you like to win more bass tournaments? If you answered “no,” then continue to fish the same lures and techniques you always do. Keep a closed mind. Never try anything new. By God, you caught a bass on a jig-and-pork in 1978, and that’s just the way it is!

If you answered “yes,” however, keep reading because the secret of catching tournament winning stringers is going to be revealed. 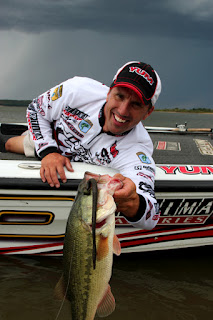 OK, there is no secret. No magic lure, secret technique or expensive machine that drives bass into an insane feeding machine. However, the fact is that a jig with some kind of soft plastic as a trailer has been on the business end of more tournament-winning rigs than any other.

Winning major bass tournaments requires thorough preparation before and flawless execution during the event, as well has “giving them what they want.” Bassmaster Elite Series professional anglers Alton Jones and Edwin Evers know that along with having the right lure, each angler must make adjustments during each day to catch the biggest bag. These two anglers won nearly $1 million dollars on just three tournaments using a variation of that old jig-and-pork you (or your grandpa) caught a bass on back in the 1970s. Jones won the Bassmaster Classic in 2008 on Lake Hartwell in South Carolina; Evers won the Bassmaster Elite Series Citrus Slam Tournament on the St. Johns River and the PAA Series Tournament on Lake Norman, and all three tournaments were won with a jig.

Crawfish imitations just seem to catch better numbers of bigger, quality bass. Another way of looking at it is that they eliminate the smaller bites, thus giving the bigger bass a better chance of getting on your line.

Only a handful of anglers have ever won the Bassmaster Classic. Jones won in 2008 on a jig-and-craw combination of his own creation. He took the skirt off another jig and wired it to a BOOYAH jig head. His newly built prototype jig became known as the A-Jig.  Jones then added a YUM Chunk as a trailer. The skirt, jig head and trailer combination was the key to his win.

After Jones won the Classic on Lake Hartwell with the new BOOYAH A-Jig it became an instant must-have lure among tournament anglers. The BOOYAH A-Jig features the same style skirt with both round rubber and silicone strains – a skirt combination that flairs and provides more action. These skirts are hand-tied, and the jig features a big, round-bend hook.

Jones credited his victory in the Classic to this jig-and-chunk combination and to locating the right fish in deep water. “I knew that I could catch them early on a spoon, but I needed to figure out a different lure that would catch them after the morning bite subsided. So, I spent every day of practice trying to catch them on different lures. Finally, I tried my prototype jig combination on a bottom drop off,” said Jones.

On his first cast, he caught a nice keeper, and another on his second cast.

“I knew right then, I had found something special,” said Jones.

To get his winning stringers he fished in 35- to 55-feet of water around drains and depressions with scattered stumps and cover.

“I literally had to crawl the lure on the bottom very, very slowly, and when the jig came off the bottom and fell, the bass would strike it, but only if the jig fell slowly,” explained Jones.

Jones knew the jig combination was going to be his key to winning the Classic once he started catching bass on it.

“Once I started catching bass, I knew that this was something special and it was going to be hard for any other competitor to reproduce,” said Jones.

Jig combinations won’t win on every lake. Jones says that he puts jigs first when he’s fishing a lake known for producing big bass, such as his home-away-from-home, Falcon Lake, or when he’s confident that he can get five good bites from the area he’s fishing.  Five bites are all it takes to win a tournament, but they have to be the right five, and the angler must perform flawlessly.

Professional angler Edwin Evers has two recent wins using a jig combination. In Florida at the 2011 Citrus Slam on the St. John’s River, Evers was fishing the YUM F2 Money Craw combined with YUM Pumpkin ‘Ed Jig to elicit strikes from bedding bass. The Pumpkin Ed Jig is a plain jighead featuring  a flat top and horizontal line tie that forces the soft-plastic bait to stand up vertical on bottom.

Another feature of the Pumpkin Ed Jig is the extended screw lock keeper. The longer screw lock makes attaching bigger baits easier and holds them more securely than a shorter keeper. In the Citrus Slam event, Evers pitched his lure into the bass bed and let it sit with very little action imparted with the rod. However, he selected the Money Craw because of the way it quivers and moves even when he’s not doing anything with the rod.

“When attached to a Pumpkin ‘Ed jig, the slightest current or movement will make the claws undulate and move back and forth,” said Evers. “That was really a key to getting fish to strike.”

Evers also used a jig-and-plastic combo in a PAA tournament on Lake Norman in North Carolina. Unlike the Citrus Slam, an early spring tournament in which bed fishing for spawning bass was the winning ticket, the Lake Norman event was held in late summer. Evers again selected the Money Craw as his jig trailer, but his technique was completely different.  Instead of a nearly motionless craw sitting on bottom, he used the combo to simulate a bluegill and constantly swam the bait. He admits that this combo is one he has tremendous confidence in.

Evers noted that Oklahoma’s Grand Lake, site of the 2013 Bassmaster Classic, Oklahoma is an excellent lake to fish a jig-and-craw combination. “I would fish a 3/8- or 1/2-ounce Pumpkin ‘Ed jig head rigged with a big 10-inch YUM F2 Mightee Worm in green pumpkin or plum on 14- to 17-pound test Fluorocarbon fishing line,” said Evers.

He said he’d throw that combo in deeper water around cover and structure. It’s the exact combo that B.A.S.S. Elite rookie Cliff Prince used to take fifth in the 2012 Toledo Bend tournament. He focused on bridge pilings in 20- to 30-feet of water and won Carhartt Big Bass with the rig. He knew there were lots of fish in that area, and selected the big worm in part to eliminate the smaller fish that dominated his drop-shot rig fishing.

It’s a proven fact; jig combinations can catch winning stringers of bass. Often called the most versatile bass lure, the jig-and-plastic combo helped Jones and Evers win at different bodies of water in extremely deep water, around brush or boat docks and on bedding bass. They know the secret that jigs combined with a trailer just catches bigger tournament winning bass.