October triggers a switch from largemouth to smallmouth for anglers in the north. This held true last weekend. I honoured my donated fishing trip for two from last year's Ontario Chinese Angler Association's Christmas dinner.  We planned on heading to a well-known smallmouth lake to work jigs on the bottom. I double checked with a few fishing buddies and they confirmed what I expected; it wasn't cold enough and the fishing was poor. With that news, I headed north to a deep, shield lake  rich with smallmouth. 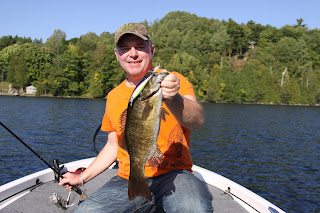 With three of us in the boat, I wanted to ensure my two guests were into fish.  We, particularly myself, alternated between a variety of lures but nothing worked like the jerkbait. By mid-day, all three of us were casting minnow plugs and jerking them back to the boat.

A few interesting things occurred that day. I stuck to the deeper water and limited myself to smaller sized plugs in the 3" to 4" range. My three best were a X-rap, Duel and OSP. Mine were regular baits without any doctoring. I primarily used gaudy coloured or silver baits because I like the flash. Plus it is easy to follow thm and react when a bass follows it.

The guy in the middle used a longer 5" plug. He alternated between baits but one thing was constant; every jerkbait had a feather on the tail hook. White seemed to be the best. Actually, he had so many follows that he changed to jerkbaits without the feathered hook to see if his hook-ups would improve. The opposite occurred, they lost total interest. He then started switching feather colours and he was back into bass. Eventually, he went back to white and immediately the action was red hot again.

The third guy in the back of the boat stuck to a Megabass 110. This bait is long, sleek and very natural. With the overcast conditions it was difficult to track his lure in the water. It simply vanished in the dark, clear water. He was into fish all day long. Surprisingly, he caught dozens of tiny bass. I guess it was too tasty to ignore. Another strange thing was that he consistently caught bass even with his buddy and myself casting ahead of him. His natural presentation and slower jerking cadence was appealing to bass that just ignored two other offereings.

In summary, if you're planning on heading out this Thanksgiving don't forget your jerkbaits. Make sure you have a few with feathered tail hooks. If you don't have, then start making some. I plan to tomorrow after work. Plus, its a worth investing in a few Megabass, Lucky craft, OSP or other high priced jerkbaits. They seem to work on the most fickle bass.
Posted by IBASSIN.COM at 7:16 AM