Hi, this entry was initially deleted due to some editing issues. I reworked the post and I'm sure you'll like it.

This entry is a bit late due to the coverage of the FLW EverStart tournament on Lake Erie. Great to see so many friends doing well.
Muskies eat like giant bass. Feeding on magnum baits, they’re a blast. My companion for the day was Joel Isenberg. Joel and I fished a lot 20 years ago while I was in university. We fished weekly during the summers back then. If I had a spare weekend in the fall we headed to Pigeon for muskies. We haven’t make a trek for muskies together for a long time, too long, so we just had to go. 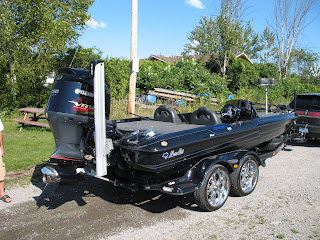 First, Joel got a new Bass Cat bass boat. This thing is pimped out. I tease him that it's so pimped out it has its own stripper pole. The pole is located on the trailer along with three steps  by the bow to help get in and out. ( If you’re too young to know what “pimped out” or “stripper pole” are don't ask your parents and don’t tell them you heard it from me).  Sporting a black /blue gelcoat and 20" wheels with skinny rubber on the trailer, the boat looks sharp. Man does it rock on the water with its Yamaha 250 SHO and Minn Kota Talon. We never really pushed it but that motor is so much more powerful than any 225 HP I have driven.
﻿
﻿
We started the morning about halfway up Pigeon. We primarily fished weedlines and holes in the grass. Joel started the day with a large black bucktail with a red willow leaf blade and I uses a 9" Storm Thunderbeast. I used it like a jerkbait but sometimes I just cranked it in.
First spot yielded nothing. Second spot nothing again. These spots are prime areas but not my favourite.  Often these spots are better in the afternoon for some reason. The third spot is a deep weed edge with a very clear break between the grass and open water. We see a nice bass skipping across the surface chasing baitfish. We cast our plugs to it but it doesn‘t show any interest and splits. Keeping the boat on the edge, Joel likes to run his bait along the weeds as I just lobbed my casts into the open water. The splash is shockingly loud. Every cast is a huge whoosh! No sneak attack here. Anyways, about half way along our weed edge, a 15 pound muskie noses right under my jerkbait. It was only a few centimetres from it. It stays for about a 3 second count, then with one flap of the tail veers off. So close but no bite. If you think smallmouth are bad for following, muskie are far worse. It's unnerving to watch a 40 plus inch fish follow a bait right to the boat. After multiple casts to the spot where we last saw it, the fish never returned. Without hooking it, we were off to spot #4.

This new place is one of my favourite. It’s the first place where I had a true 50 plus inch fish follow one of my baits. I was about 22 at the time and Joel and I joked about that trip. That fish haunted Joel all that summer. After a couple of casts along the grass, we saw a bass chasing bait on the surface and then another fish splashed about 100 metres down the weed line. Both fish were way too far to reach with a cast. This place seemed to have a lot of energy. I was thinking to switch to bass tackle. Joel helped me refocus on the muskie but I did spy a newly built dock close by so I took us on a detour. I couldn’t pass it up. A few skips with a Berkley Heavy Weight worm and bass number one is in the boat. With the bass back in the water,  it was back to the muskie fishing.

This place has clearer water with a very sandy bottom. A bit different from most of the other places we fish. As we continued along, I saw a figure zoom in from the right. I slowly jerked the bait along and he was right on it. I called out to Joel as the lure and muskie neared. This fish was millimetres from it. I bet it was breathing on it. I keep the bait slowly moving. I should have gone into a figure 8 or oval pattern with the rod but the fish just hovered there. I find the figure 8 better with a fast moving fish. This one was frozen there, then it just melted away. That was my second follow. This fish was larger than the first but not over 20 pounds.  We worked to the end of the weed line and then left. We still had a few places to check before we entered Buckhorn.