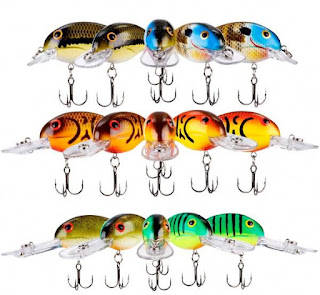 Bandit Lures made a huge impact on bass fishing with its “Mistake” color pattern that features a black back and vertical bars over a red base on one side and a chartreuse base on the other, and for 2016 anglers get three new “mistakes” from which to choose. New are the Crossbreed pattern, which pairs up the realistic Baby bass pattern on one side and the equally natural-looking River Bream on the other, Malfunction, which blends two productive crawfish patterns into one bait with Brown Craw Orange Belly on one side and Spring Craw on the other, and Mistaken Identity, which is possibly the craziest mash-up ever. This Bandit takes the vibrant Fire Tiger pattern and pairs it with the muted Root Beer pattern to create a head-turning combination for bass and other gamefish.

The original Mistake pattern wasn’t really a mistake and neither are these. The Mistake pattern was conceived and ordered by a tackle shop, and it was such a success that the company put it in its catalog lineup where it became one of Bandit’s best selling/most productive lures ever. The color pattern was designed to let anglers show bass two different looks without changing baits – a fish under a laydown sees the chartreuse side when the angler casts on the right side of the brush, and the red side when cast to the left side. The same logic applies to Bandit’s new dual-pattern baits.

The new Crossbreed, Malfunction and Mistaken Identity color patterns are available in Bandit 100, 200 and 300 series crankbaits. For more information go to www.banditlures.com.
Posted by IBASSIN.COM at 6:00 AM