By Cara D. Clark
BASS PRESS RELEASE
BULL SHOALS, Ark. — Brandon Palaniuk has been relentless in his pursuit of a win during the Elite Series TroKar Quest on Bull Shoals Lake, and he isn’t holding anything back, even though he has almost a 13-pound lead over his nearest rival.
The 24-year-old Idaho angler’s Day Three weight of 19-10 gave him a three-day total of 65-7 and an almost insurmountable margin over the rest of the field.
Palaniuk said a dramatic change in weather – from overcast, rainy and warm on Friday to 38 degrees and bluebird skies at the start of fishing today – made fishing much tougher, and it slowed even more as the afternoon progressed. He expressed disappointment that he didn’t weigh 20 pounds, as he did the first two days, yet his 19-10 was the heavyweight of the day.
Even with the tournament virtually in the bag, Palaniuk is determined to catch the heaviest string again in Sunday’s final round.
“I’m going to go out and try to sack up 20 pounds,” Palaniuk said. “If I have 20 pounds by 7:30, I’m going to keep grinding it out until 2 o’clock when I have to make my run back.”


Aiming to catch Palaniuk is Britt Myers of Lake Wylie, S.C., who moved up two places to second with 52-8. He feels as if he’s dialed in on the right tactic to do that: fishing a reaction bait. 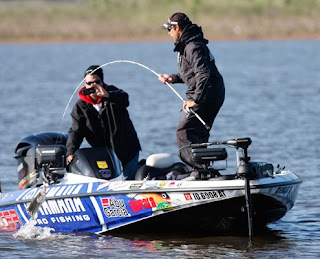 “When you can keep the bait in the strike zone where the fish are, and they react to it like that, it’s good,” Myers said. “At first, I was trying to catch the fish suspended, then they moved up higher." If I can just follow where the fish are (moving), I can have some good luck. I might go out tomorrow and catch 12 pounds, or I might go out tomorrow and catch 25 pounds.”
Bobby Lane of Lakeland, Fla., third with 50-13, said he should have had a much bigger limit as he lost three big bass.
“I think I had an opportunity to catch 17 or 18 pounds today, but Palaniuk’s tough to catch,” he said. “The cold front put a little ding on the fish.”
In Sunday’s final round, he intends to move less and milk everything he can out of certain areas. “The longer you fish one spot, the more opportunity you have to catch a big one there,” he said. “It’s a crap shoot.”
Matt Herren, fourth with 50-9, noted that the lake level, which has been dropping several inches every day, is a major reason he fell from second yesterday to fourth.
“I’ll get a chance to regroup tomorrow and put together another pattern,” said Herren, explaining that he will switch to a deeper-diving crankbait.
Scott Rook, the only Arkansan to make the Top 12, discovered that big smallmouth are biting deeper than the largemouth, and two smallies helped him hold onto afifth with 49-10.
First prize in the TroKar Quest is $100,000 and a qualification for the 2013 Bassmaster Classic. Pros are also fishing to rack up points that count toward postseason entry, Classic qualification and the Toyota Tundra Bassmaster Angler of the Year award.
The public is invited to the final TroKar Quest weigh-in Sunday, which begins at 3:30 p.m. CT at Bull Shoals White River State Park at Pavilion #2 & Picnic Area on the east side of Bull Shoals Dam.
Coverage on Bassmaster.com will continue each day. Fans have free, full access to live streaming video, the real-time leaderboard, results, reports and photo galleries. On Saturday and Sunday, the War Room feature will provide updates from the water along with analysis and commentary.
Posted by IBASSIN.COM at 8:50 AM