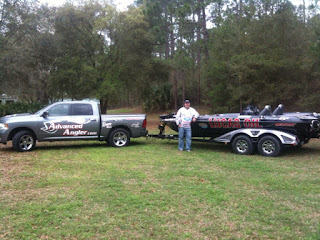 Murray, a two-time B.A.S.S. winner is known for his ability to fish at all depths, which has made him a champion across the country. Along with his two Bassmaster wins, Murray is a two-time U.S. Open Champion, and the only angler to win a fully rigged boat on all of the major waterways throughout the Western United States.
Murray is excited to be working with a company that produces tremendous products and stands in the industry as a champion. "I've used Lucas Oil products in my tow vehicles for years," said Murray. "Their commitment to quality and winning is evident in their new Marine line of products and it makes me proud to be associated with a company like Lucas Oil."
Murray also said that one of the true benefits of running the Lucas Oil wrap has been the connection with the public. "One of the best parts of this relationship has been the people," he said. "Everywhere I go, someone is telling me about their experience with Lucas Oil. It has been a great and fun way to connect with the public."
Jamie Devney, Director of Sales and Marketing / Team Lucas, echoed Murray's enthusiasm for the partnership. "With the new introduction of the full line of Lucas Oil Marine Products, it is imperative that we align ourselves with quality anglers to carry our message," said Devney. "We are very excited to now include John Murray into the Lucas Pro Angler family. Our business alliance with Ranger Boats, made him a valuable addition to the team. We are looking forward to our partnership with John and his success this year in the BASS Elite Series."
Murray's main wrap on his 2012 Ranger Z521 / Mercury Verado four stroke package will feature the Lucas Oil branding prominently displayed on his vessel. His tow vehicle will still be branded with his title partner from 2011; AdvancedAngler.com.
John Murray is one of the most celebrated professional anglers to ever come from the Western United States. He is a two-time Bassmaster Winner, an FLW Outdoors winner and a two-time U.S. Open Champion. Murray is the only angler to have won a fully rigged boat on every major waterway in the Western United States; he is a six-time Bassmaster Classic qualifier and has earned more than $1.8million in career earnings. Murray lives in Phoenix, Ariz., is married to his wife Amy and has one son; TJ. He is sponsored by Lucas Oil Products, Ranger Boats, Mercury Marine, Powell Rods, River2SeaUSA, Wave Worms and Ardent Reels.
Posted by IBASSIN.COM at 9:17 AM