ROGERS, Ark. – A full field of the best bass-fishing professionals from all across the United States, Canada, Spain and Japan opened the Walmart FLW Tour Major on Beaver Lake presented by Straight Talk on Thursday. Anglers used a variety of strategies and tactics beneath the sunny Arkansas skies as they began the competition for a top cash award of up to $125,000.
Despite the multiple techniques the professionals employed, the results were very similar – just 2 pounds 3 ounces separated first place from 10th. At the end of the day, EverStart pro Randall Tharp of Gardendale, Ala., held the day one tournament lead with a five-bass limit weighing 15 pounds, 7 ounces. Tharp has a 12-ounce lead over Snapple pro Jacob Powroznik of Prince George, Va., who caught five bass weighing 14-11. 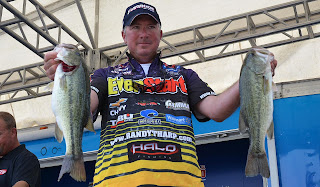 “I’m pretty pleased with my weight today,” said Tharp, who has career winnings of more than $640,000. “But I believe I can catch more fish tomorrow, especially if the wind is blowing. I don’t think anyone else is doing what I’m doing. I’m fishing a certain bait on certain banks and it’s real unique.”
Tharp said he fished areas that he had not targeted in practice. Although he chose to start his day near areas where he had found fish during practice, most of his fish came from areas that he had not fished before.
“I had a real good practice coming into this tournament,” Tharp continued. “I’m known for practicing from daylight to dark, but for this event I was finishing up around 4 p.m. That was mostly because I did not want people to see where I was fishing. I made sure that I was real cautious today as well – I tried not to stay in one spot for too long.


“I caught four today very early – within the first 15 minutes. I had a limit by 8:15 a.m.” Tharp went on to say. “I ran pretty far up the river and I caught some up there, and I caught some in the clear water down in the lake. The lake is really unique right now due to the water conditions and the (water) level being down. Several of the bass that I weighed in today were pre-spawn, I saw two spawners and there were quite a few post-spawn fish as well. All five of my bass were largemouth today.”
Despite the odd conditions, Tharp is still extremely confident about the remainder of his tournament
“Beaver Lake is a real tough lake, but that’s when I seem to do my best. I believe that there is a bigger bag out there. I’m pretty confident in my pattern, and believe I’m going to be fishing all four days this week. I’m more confident right now than I was earlier this year when I won at Okeechobee.”
Rounding out the top 10 pros after day one on Beaver Lake are:

3rd: Kenny Blackwood, Rogers, Ark., three bass, 9-6
4th: Maurice Cobb, Kuttawa, Ky., four bass, 7-14
5th: Rob Hicks, Lula, Ga., five bass, 7-8
6th: Greg O’Neal, Winchester, Tenn., four bass, 7-7
7th: Ralph Myhlhousen, Council Bluffs, Iowa, five bass, 7-4
8th: Steven Meador, Bella Vista, Ark., five bass, 7-3
9th: Clint Williams, Fayetteville, Ark., five bass, 7-0
10th:Sam Loveless, Somerset, Ky., three bass, 6-14
For a full list of results visit FLWOutdoors.com.
Pipkens caught Thursday’s big bass weighing 4-8 in the co-angler division to win $250.
Overall there were 275 bass weighing 420 pounds, 12 ounces caught by co-anglers Thursday. The catch included 13 five-bass limits.
Co-anglers are fishing for a top award of $25,000 this week plus valuable points that could help them qualify for the 2012 Forrest Wood Cup presented by Walmart. The top 35 co-anglers in the point standings from the six Walmart FLW Tour Major tournaments will qualify.
Anglers will take off from Prairie Creek Park located at 9300 North Park Road in Anderson at 6:30 a.m. each morning. Friday’s weigh-in will also be held at Prairie Creek Park beginning at 3 p.m. Saturday and Sunday’s final weigh-ins will be held at the John Q. Hammons Center located at 3303 Pinnacle Hills Pkwy. in Rogers beginning at 4 p.m.
Fans will be treated to the FLW Outdoors Expo at the John Q. Hammons Center on Saturday and Sunday from noon - 4 p.m. prior to the final weigh-ins. The Expo includes Ranger boat simulators, the opportunity to interact with professional anglers, enjoy interactive games, activities and giveaways provided by sponsors, and fans can learn more about the sport of fishing and other outdoor activities. All activities are free and open to the public. On Sunday the first 300 children 14 and under who are accompanied by an adult will receive a free rod and reel combo courtesy of US94 KAMO-FM Country. Also on Sunday one lucky fishing fan will win a Can-Am ATV courtesy of KNWA. The ATV giveaway is free to enter but the winner must be present at the conclusion of Sunday’s final weigh-in to win.
Coverage of the Beaver Lake tournament will be broadcast in high-definition (HD) on NBC Sports Network when “FLW” airs June 3 from 1 - 2 p.m. ET. "FLW" is hosted by Jason Harper and is broadcast to more than 559 million households worldwide, making it the most widely distributed weekly outdoors-sports television show in the world.
For complete details and updated information visit FLWOutdoors.com. For regular updates, photos, tournament news and more, follow us on Facebook at Facebook.com/FLWFishing and on Twitter at Twitter.com/FLWFishing.
Posted by IBASSIN.COM at 11:06 PM