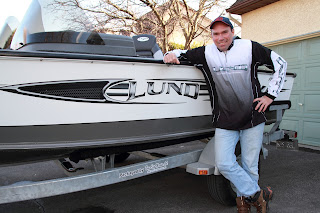 Just wanted to give a little press to longtime friend Lonnie King. He just signed up as one of the newest members of the Lund Prostaff team, through Bay City Marine in Hamilton. Lonnie is a fisheries biologist by profession and a multi-species angler.  Actually, he is an old university friend and one hell of a fish head. He is the currently the Walleye editor of Ontario Out of Doors Magazine, and a regular contributor to In-fisherman magazine as well.  Lonnie has won a number of high-profile multi-species events, winning the Ford Angler of the Year twice and barely missing winning it a third time. Most recently he and his sons won a brand new outboard motor through the Mercury Film Festival.   Many of you voted for him (He says Thank!).
When asked what boat he will be running this year, Lonnie had this to say; ‘I had been running a Lund 1700 for about 15 years, (If Lonnie couldn't destroy it; it is beyond excellence) and have probably caught thousands of fish in it, but I thought it was time for a modest upgrade. This year I opted for a Lund 1725 Explorer. Needless to say Lund has made many substantial upgrades since I bought my first boat. The Sport-Trax system for mounting rod holder and accessories is amazing. Tonnes of storage room including 2 rod compartments. One right down the center of the front platform and one on the passenger side. A true fishing machine!”
For more fun facts about Lonnie check out the Lund Prostaff page http://www.lundboats.com/pro-staff-profiles/186-lonnie-king or visit his Youtube page at http://www.youtube.com/user/LonnieKingg?ob=0
He’s also on facebook.
Posted by IBASSIN.COM at 12:03 AM