The Canadian connection will play a vital role in the outcome of this tournament. Lake Ontario means smallmouth and rocks. Find the areas that are productive and fish will be there. That sounds a bit dumb not with big water and rock not much changes over the years. Fish largemouth waters means dealing with change. Weed growth varies, docks get removed, fallen trees get washed away and lily pads die off. Rocks,  reefs, points, flats and drops are timeless and the more time on the water the better your game will be. This is why the Canadian connection is so deadly on this water system.
The Big Players
Bob Izumi 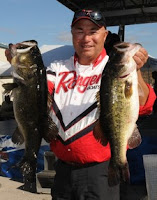 He has been fishing tournaments here since the 1970s and has won everything in Canada that needs to be won. He and won it and won it again. He is a legend with unlimited resources. This is an angler who loves to make mammoth runs in rough seas. He can win with green or brown bass and is a master of it. He had a good bag on Day 1 and his son won the Canadian Open out of Kingston, across Wolfe Island from Clayton New York, last week. Bob finished well in that big tournament as well.
Cory and Chris Johnson
No fair to lump them together but they are brothers. Exceptional anglers on the team tournament circuits in Ontario. Both are deadly at smallmouth but are known as largemouth aces.
Chirs is in second place and looking to lead the whole thing. Chris already has a FLW top 10 on the Potomac River this year. The two also won 2 out of the 3 Bassmania tournaments held out of Trenton, Ontario a few weeks back. Their first win was with 27 plus pounds for 5 bass. That is a staggering amount of bass. Remember this bag didn't have a 10 pounder like tournaments in Texas or Florida. Cory is doing well in 19th place, one behind Bob Izumi, but don't count him out. He just won the Canadian Open and is on a super hot streak. My pick is that one of these two will win this weekend. 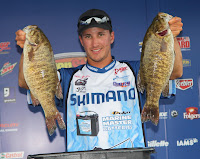 Mike Desforges
Mike is superman! Anytime there is a big money tournament with smallmouth this guy does very well. He won $100K on Lake Simcoe. He has dominated any Bassmaster tournament out of  western Lake Erie. He has won EverStarts on Lake Ontario back to back. He in now sitting in 74th place due to a very light bag. He could have had engine or boat problems. He could have had a bad day or maybe the fish split. Regardless, he is a machine and will move up. I don't bet but siding with Mike is not betting, it is winning. 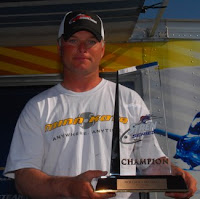