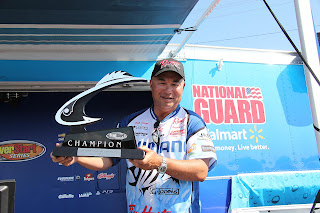 CLAYTON, N.Y. – Review practically any fishing tournament history throughout eastern Canada and you won’t have to look far to find Bob Izumi’s name. Well, the Milton, Ontario angler’s no stranger to U.S. events, but today he finally notched his first American victory in the EverStart Northern Division at the 1000 Islands.

“I told some friends and my wife that before I die, I have to win a tournament in the U.S.” Izumi said. “The Kingston (Ontario) area has been good to me. I’ve won (several) Ranger boats, a Chevy truck and numerous other tournament prizes on the Canadian side over the years, but I’ve never won one stateside. I love this stuff. All I do is eat, sleep and drink tournaments.”

Izumi earned his final-round berth by placing seventh on day two with 37-0. That was a big improvement from his 17th-place finish a day earlier however, Izumi said his second tournament day was an emotional rollercoaster with numerous letdown and late-day heroics.

“You know, all anglers talk about losing fish and yesterday was my career bad day for losing fish,” Izumi said. “I lost a 5-pounder that jumped off, a 4 that pulled off and then I lost another heavy fish deep. I was a little distraught, but then the last cast before I came in, I caught a 4-pounder and that saved my day.

“Today, I had a couple of small ones in my well, along with three good ones. In the last little bit of fishing, I caught two good ones. The funny thing about tournament fishing is that you’re never done until you start running to weigh in. It can happen the first cast or even the last cast of the day. That’s what keeps it exciting. It’s an adrenalin rush and anyone who fishes tournaments knows that we do it because we love the excitement.”

In the finale, Izumi sacked up 21-1 – the day’s heaviest catch and finished with a winning total of 58-1. In his victory speech, Izumi thanked his wife for convincing him to stick with the right game plan

“Last night, my wife gave me a pep talk because I was a little down and out after losing three big fish yesterday,” Izumi recalled. “She said ‘Bob, you have so many spots out there you couldn’t fish them in 10 years. What are you worried about?’

“I said ‘The wind gusts are (forecast) for 21 mph’ and that was going to blow out all of my open water stuff because I fish a lot of deep, main lake stuff. She said ‘Bob, you just have to fish hard. You have the spots; you just have to go do it.’”

Izumi said that he considered dodging the anticipated wind and hunting largemouth within the protected waters inside the St. Lawrence River. His wife, however, shot down that notion and convinced him to target brown fish on the big waters.

“Well, I kind of puckered up this morning, thinking it was going to blow, but it didn’t,” Izumi said. “It might have blown 5 mph, so everything worked into my favor.”

Izumi worked a series of spots in open water near the U.S.-Canadian border. He targeted hooks in the contour lines in 24-42 feet. Depending heavily on his Lowrance HDS unit, he found that bigger was definitely better.

“It was important to look for bigger fish and bigger hooks on the graph,” Izumi said. “These HDS units are so sensitive you can actually see the bigger fish. When I found a hook with a couple of big fish, I’d sit on it and fish it vertically with a dropshot. It’s like sight fishing with your electronics.”

Dropshotting delivered all of Izumi’s fish and specific rigging was essential. Using 10-pound Berkley 100% Trilene fluorocarbon, Izumi ties his mainline to a No. 10 black in-line swivel and configures his dropshot with a piece of the same fluorocarbon tied to the other end. He used a No. 1 hook, a 20-inch leader and 5/8- to ½-ounce tungsten weights to quickly reach bottom for an engage the fish.

Berkley Gulp! baits were his mainstay, with the 3-inch fry (green pumpkin and watermelon), 3-inch minnow (green pumpkin/pearl) and 4-inch crawler (green pumpkin) seeing most of the action. However, when his bite slowed, Izumi tried a new goby-shaped dropshot bait made by Set the Hook and coaxed one of his day-three weight fish. With any of these baits, a static presentation was most effective.

Like many of his competitors, John McGoey, of Omemee, Ont., lamented the windy conditions that limited access to some of Lake Ontario’s sweet spots during the first two days of competition. Today, however, a much calmer lake compensated anglers for two days of meteorological stinginess and McGoey took full advantage of this opportunity. Starting the day in sixth place, McGoey caught a limit that weighed 19-8 and rose four spots to finish second with 57-1

“My day started slowly. I went to my big-fish spot and I was going to camp on it. I stayed there for 2 ½ hours and only had one fish. The lake was flat, so I made a run to a deep-water spot that I couldn’t fish all week because of the wind. It just worked out. The big fish were there and I only lost one, so it was a good day.

“These fish were in the middle of the lake – no seclusion at all, so I couldn’t fish them for two days. I got to them today and they were willing to eat. I stayed there from about 9:30 this morning until about a quarter ‘til 12.”

Dropshotting XZone Slammers in about 30 feet was the ticket for McGoey. Smoke purple fleck and cream/watermelon back were his best colors. McGoey used 15-pound PowerPro braided main line with a 6-pound Berkley 100% Fluorocarbon leader, a Trokar 1/0 hook and a ½-ounce tungsten weight.

Johnston jumps up to third

Cory Johnston, of Petersborough, Ont., caught a day-three limit of 19-14 and improved from eighth place to third with a tournament total of 56-8. Throughout the event, Johnston caught most of his fish by dropshotting an XZone Slammer.

“I caught a few by dragging tubes, but for the most part, I was using my Lowrance electronics to mark the fish on the graph and drop right down to them,” he said.

Johnston and his brother Chris (seventh place pro) spend extensive time on Lake Ontario, so his is an intimate knowledge of the area’s potential. The Great Lake, he said, often rewards diligent searches with treasure troves of smallmouth.

This fishery is absolutely incredible. You have to put in your time to find the right spots, but when you do, they’re loaded up.”

Johnston said he was relieved that the rough conditions of day two subsided in time for the final round of EverStart competition. “It was a great day today. The wind layed down and that made it nice to fish.”

Seal slips a notch to fourth

Gregg Seal, of Eldred, Penn. will likely remember the EverStart Northern Division tournament at the 1000 Islands as much for the statistical drama as for the actual fish he caught. Seal started the final day of competition in third place, just 13 ounces off the lead and only 8 ounces behind then second-place pro Jeff Hippert. When the dust settled after the final weigh-in, Seal owned the fourth-place spot with a three-day total of 56-5 – a mere 3 ounces behind third-place pro Chris Johnston.

“I like how close it was when we all went out this morning,” Seal said. “It made it interesting because no one ran away with it and everyone in the top-10 had a chance at (winning), but I don’t think I have any fingernails left.

As he’d done on days one and two, Seal fished the St. Lawrence River, but with today’s northwest wind, he had trouble synching his presentations with the current.

“When you fish the river, current is everything and everything (about your presentation) has to be natural,” he said. “You can’t go against the current, you have to go with it at the right speed. I just couldn’t get the speed right today and it cost me.”
Seal fished a variety of dropshot baits, including a Berkley Gulp! minnow, Poor Boys goby and darter and Yamamoto Shad Shape Worm and Senko. He caught a day-three limit of 16-15.

Eric Foltin started the day in 10th place, but after catching the second-largest bag of the final round – 20-9 – the Lebanon, Penn. pro gained five notches to finish fifth with 55-12.

“I fished basically one spot (on days one and two) and it dried up today,” Foltin said. “I caught one good fish there in the morning, then I went to my backup spot and they were there.”

Noting that he caught all of his fish on dropshots, Foltin reported a busy week with nearly non-stop action: “I have sore hands. I caught 100 fish this week.”

Best of the rest

Rounding out the top-10 pro leaders at the EverStart Series 1000 Islands event: