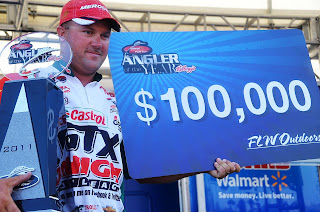 After competing in six difficult tournament venues ranging from Tennessee to South Carolina, Louisiana to Kentucky and Alabama to Arkansas, David Dudley of Lynchburg, Va., proved to be the best of the best on the FLW Tour in 2011. As a result, Dudley took home his second career FLW Tour Angler of the Year title, defeating second-place Brent Ehrler by 14 points total.

“I analyzed myself last year and realized that I’m not where I wanted to be,” said Dudley. “Right now the technology is so good and the anglers are so good that I realized I had to do better. I don’t chase angler-of-the-year titles. My goal is to win (tournament titles). And if you do that, everything falls into place. But that being said, this feels pretty good. It feels even better than my first (AOY) title because the field gets tougher and tougher every year. Equipment is getting better and the anglers are continuing to get smarter. So it means a lot to win.”