Mid September is a tricky time of year to catch bass. They are in transition; forcing anglers to find them. Some lakes are still in summer mode, while others are in some phase of autumn.

This day on the lake will be a done through a photo essay. I cannot reveal the name of this lake. It is a true gem. Too much fishing pressure will kill it. It is well known lake which gets enough pressure from the odd tournament and local guys, I don't want to add a whole lot more. I spent the day with my wife and she was the videographer while I got to fish.
A few of you asked for more details on the fishing, particularly the baits and rigs. I will provide links to products to help you identify what I am using.

I went after smallmouth, after trying a row of docks near the launch. Water temp was 62.3 degrees F, so I expected the smallmouth to be on the hunt along shallower drops. When I fished this lake in mid August, I notice a water level drop of about 1 foot from my first trip to the lake in late June. Now the lake is at least triple that. I estimate, from the dangerously, shallow boat ramp and the exposed overhanging trees, that the lake is down almost 1 metre (3 feet). 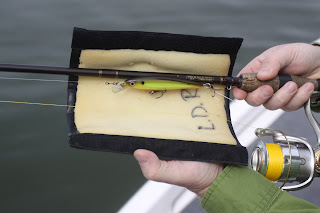 This Rapala jerkbait is all the rage with my friends in northern Ontario. So, I tried to see how well it would work for me.
I didn't even get a follow. It's not the Rapala's fault, I just think the fish were not there. (So much for getting any free product from Rapala in the future). I heard that this bank and adjacent drop can be dynamite but not for me on Saturday. We did some good filming of how to use a jerkbait with spinning gear. Spinning gear with a reel spooled with braid and a Fluorocarbon leader really is the way to go. 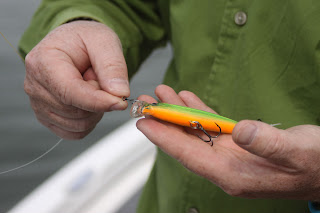 Here is a Fasttach Clip. It is not a new product, but its new to me. It is a great way to slip on and off any crankbait or jerkbait. It is like a snap just with a better design. I would get a few if I were you. He also makes a fool-proof cross lock snap. 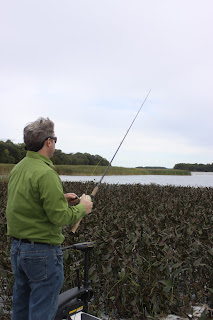 Next stop was punching heavy reeds, matted grass and arrowheads. I love this style of fishing. My Minn Kota trolling motor worked so well here. I got a new Minn Kota in August and it is so strong, quiet and weedless. Sounds like a plug and it kind of is. You cannot fish this stuff without the weedlessness of a good motor. I know, I used to fight with another motor and it was terrible in the weeds. I have an 80lb which is a bit over-the-top for my rig but the extra power is so handy.
Got five and lost one largemouth in the reeds. All on a Texas rigged Berkley chigger craw with a 3/4oz tungsten weight on 50lb Stren braided line. I love the yellow line especially when the day is hazy like it was on Saturday. Stren has Hi-Vis blue now which I have on another reel, but the yellow, which I think is older, is amazing stuff. Grab it if you find it. My largest bass, a think was in the low 4 pounds class,  came from a cut in the arrowheads. This cut held a little mat of weeds across it which just screamed "FISH ME!" Wait till you see the film. I actually call the shot. I point to the mat, pitch to it, then set the hook. Glad it all got caught on film. 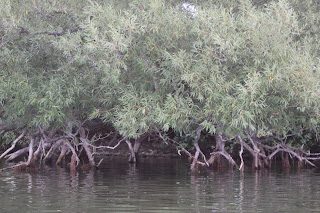 Next stop was to a bank with a sandy bottom and a long stretch of fallen trees. Only problem was all the trees were out of the water. Any water still left under them was only inches deep. I still got 2 tiny bass on a Punisher jig made by Jarrod Dean. He won the 2011 Top Classic and so many other tournament with is own jigs. Only fished about 4 trees before I moved away from the bank to search out weedbeds. 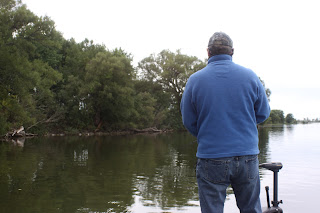 This is were the action heated up. I nailed 4 bass along the inside grass beds. Just pitching to what looked good. Nothing too technical, just fishing. Again, using a smaller flipping jig with an Abu Revo reel on a Simax 6'10" heavy action rod and Stren braid. I love my 6'10" casting rods. It is a great length and always stiff enough to fish with. Any shorter seems too short for me and anything longer becomes a meat stick. I love flipping rods but this six foot rod is magic in the hands. I have Fenwick and Simax rods in this length and love all of them. 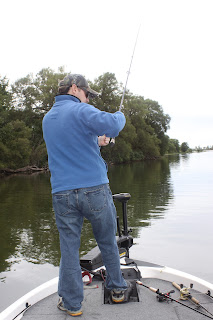 Just zigzagging along, pitching to anything that looked like it would hold a fish. I had to move further and further away from the bank. It seemed the fish wanted to be shallow but not on the bank. I guess they needed the sun but felt unsafe under the shallow cover along the bank. 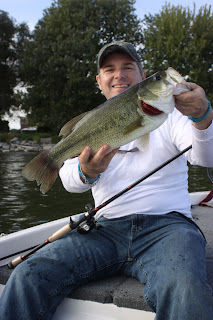 Soon after I switched to docks. The water was almost 68 degrees F along this shoreline.  A big improvement from where we launched. Also, this area was in a protected area with no wind blowing cold water onto it. Many of the big, steel docks were out of the water which was disheartening. Anytime I came across a dock with any water depth there was a bass. Skipping jigs and craws under 35 docks produced  6 bass and this was the largest of them all. I think it would be just under 5 pounds. It was so mean. A wild, wild fish. As soon as I hit it with the hookset, it was off. This fish and 3 more came on the Punshier jig and two came off a Jumbo BerkleyChigger Craw rigged on a Jika Rig
Till Next Time!
Posted by IBASSIN.COM at 12:10 PM