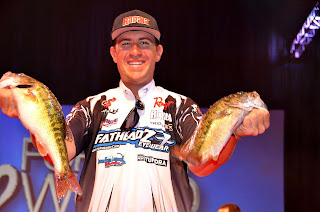 Overcast skies and wind greeted anglers on the second day of competition. After weighing a massive 21 pounds, 15 ounces on the opening day of competition, Fatheadz pro Jacob Wheeler of Indianapolis, Ind., retained his lead after Day 2 by weighing a five-bass limit for 11 pounds, 12 ounces. Wheeler’s two-day catch of 10 bass weighing 33 pounds, 11 ounces gives him a 3-pound, 3-ounce lead heading into the third day of the tournament.
“I just never got that big bite,” said Wheeler, who won the Bass Fishing League All-American in 2011. “It was a struggle this morning to catch what I caught. I pulled into the area that I really thought was a good area where I caught three big ones yesterday and didn’t catch any good ones there today.”
Wheeler said he had only three fish at 1 p.m. He started to scramble, and managed to eke out seven keepers during the day.