At stake in this finale of the three-event Northern Open season are cash, prizes, a potential berth in the 2013 Classic and invitations to join the 2013 Elite Series. To earn a spot in the Classic, an angler must not only win an Open tournament but fish all three Open events in that division. Gluszek has fished the two previous Northern Opens this year; Niggemeyer has not.
Instead, Niggemeyer came to New York and Cayuga Lake in hopes that it would be a good tune-up for next week’s Elite finale on nearby Oneida Lake. Now he finds himself in contention to win.
Careful not to give away too much information early in the tournament, Niggemeyer did say that he was surprised he didn’t need to “fizz” his bass today. Veteran anglers know that means he’s catching them in deep water. “Fizzing” is a process used to release gas from a fish’s swim bladder after it’s brought up from depths of 20 or more feet.
All of the bass he weighed in today were largemouth, though many brought to the scales by other anglers were smallmouth. Niggemeyer added that the technique he’s using is one he employs to great success on waters near his Texas home. 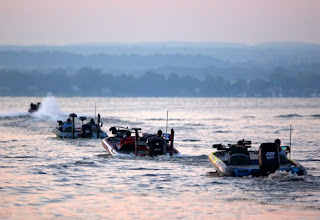 “It’s probably the technique that I have the most confidence in,” he said, adding only that he’s using a Strike King soft plastic bait, St. Croix rods and Ardent reels.
Kurt Dove of Del Rio, Texas, is in fifth place and less than a pound and half off the pace with 17-12. Like Niggemeyer, he’s using his experience on Texas waters (he guides on Lake Amistad) to put bass in the boat in New York.
“For me, it’s all about the grass,” Dove said. “I’m catching my fish 10 to 15 feet deep on soft plastics and also on a 1 1/2-ounce jig. I only had eight or 10 bites today, but I’m in a good area. I have to be really efficient in the morning when they’re more active and slow down and feed it to them as the day progresses.
Not all of the leaders are fishing deep. Michael Murphy of Gilbert, S.C., is catching some of his bass as shallow as two feet. Part of his pattern selection was based on what he found in practice, but part came from physical necessity. Murphy had major shoulder surgery in April and is still recovering. He lacks strength for some maneuvers, and flipping and pitching suits his physical abilities right now.
“As long as I keep my elbow close to my side, I’m OK,” Murphy said. “It’ll take about a year to get my muscle development where it needs to be.”
In the meantime, Murphy was able to flip and pitch 15-13 — good enough for 18th place — into his boat today using an unidentified dark soft plastic bait fished behind a Raines tungsten sinker on a 5/0 hook and 65-pound-test Spiderwire. He’s not getting a lot of bites, but they’re quality fish and he has them to himself. That could be a big factor here.
The Carhartt Big Bass leader after the first day is Ken Golub of nearby Pitsford, N.Y. His 5-11 largemouth was nearly half his total weight of 11-15 — good enough for 40th place on the pro side.
Among the co-anglers, Stephen Evans of Cleveland, Ohio, leads the way with a co-angler limit of three bass weighing 10-9. His lead is a scant two ounces over Chris Siclare. Eight other co-anglers are within a pound of the lead.
With the top ranking anglers in each Opens division earning invitations to join the Elite Series in 2013, many eyes are focused on that race. The Northern Open points leader heading into this season finale is Michigan pro Art Ferguson, a four-time Bassmaster Classic qualifier. Unfortunately for Ferguson, he struggled today and caught just one bass weighing 2-1. Without a significant comeback on Day 2, he’ll likely fall in the standings and may miss an invitation to join the Elites in 2013.
Posted by IBASSIN.COM at 3:58 AM