DULUTH, Ga. – At 21 years of age, Jacob Wheeler is barely old enough to sip his hard-earned victory champagne. But he executed a game plan and held his composure like a seasoned veteran at the 2012 Forrest Wood Cup on Lake Lanier.
During prepactice, Wheeler used a jet boat to run up and explore the Chattahoochee River. He got the idea from fellow Rapala Pro Staffer Ott Defoe, who did it somewhat successfully back at the 2010 Cup. The first two days Wheeler confidently caught 13- and 14-pound limits. But there was one major problem. His tournament boat wouldn’t allow him to access much of that productive water. After exploring other vessel options, Wheeler decided to travel as far as his Ranger would let him. To his surprise the largemouths were still biting slightly downriver; the potential was there.

What Wheeler didn’t know was that these current breaks held 5- and 6-pounders. The Fatheadz pro caught an unimaginable 21-pound, 15-ounce limit on the first day of the tournament to open up a 6-pound lead. From there, each day was a balancing act of saving water and managing his fish. On day two he simply wanted to be consistent and put a limit in the boat. The next day he pushed the pedal a little more so that he simply had to catch a limit Sunday to claim the Cup.
Amazingly, there were never any missteps, miscalculations or mistakes. The bite was not great on the final day (he caught only six keepers) but Wheeler had more than enough to walk away as the youngest pro ever to win the Forrest Wood Cup.
“It was a struggle today,” said the Indianapolis, Ind., native. “The whole time I tried not to think about the money or the Cup. Every time I sat down to run to the next spot I might have been jittery, but I realized I had to stay focused and fish at 100 percent and capitalize on every single bite.” 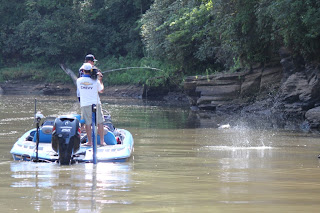