Brent Chapman is 2012 Bassmaster Angler of the Year

SYRACUSE, N.Y. — Maybe Brent Chapman will let up now. The man many regard as the most focused, single-minded angler of the 2012 Bassmaster Elite Series has accomplished exactly what he set out to do at the beginning of the season.
Saturday, Chapman of Lake Quivira, Kan., was crowned 2012 Toyota Tundra Bassmaster Angler of the Year, one of the sport’s prestigious achievements. The title comes with a $100,000 prize.
“This is what we all strive for,” Chapman said as he accepted the trophy in front of a crowd at The Great New York State Fair in Syracuse, where the Bassmaster Elite Series is holding its final two weigh-ins of the regular season.
“I feel like a huge weight has been taken off my back,” Chapman said. “To achieve a lifetime goal — well, I’ve never done that before. It’s probably going to take several days before it sinks in. It’s truly unbelievable.”
The newly crowned Angler of the Year triumphed in the most hotly-contested race in many years. He took the lead in points after the third event. One of his closest friends and traveling buddy, Randy Howell, was one of his strongest threats. Howell even took the lead from Chapman at one point (but they remain friends to this day). Todd Faircloth, and after him, Ott DeFoe, stepped up and turned up the heat.
Coming into the final event on Oneida Lake, Chapman was 13 points ahead of DeFoe, and 20 points in front of Faircloth. Others, such as Terry Scroggins, could have made a run on Chapman by shining at Oneida and walking through a door Chapman opened if he had made mistakes.
It would have taken both that open door and a stellar performance at the New York event to catch Chapman. He remained focused, he worked on his tackle until the wee hours each day, and he slept when he could. He was always forthright about the state of his nerves — up, then settled, then keyed high, then easier again. Even under the extra pressure, he remained gracious — and all along was a contender for the Ramada Championship title.

Saturday, he added to his two-day catch of 30 1/2 pounds by putting about 13 pounds in his livewell by 9:30 a.m. Only then, he said, did he begin to believe the AOY crown might be his. But Chapman still didn’t know what DeFoe had caught, so he was not confident. Back at the weigh-in site, he waited in the wings offstage for his turn to weigh his fish and find out if he won.
“People were already congratulating me,” he said. “But I’m like, ‘I haven’t got it yet. Until they hand me the trophy, I haven’t got it.’ ” 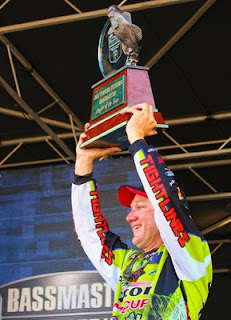 Chapman’s AOY triumph put an end to the reign of Kevin VanDam, who had a four-year command of the title from 2008 through 2011, and has won seven crowns so far in his career.
“It’s been a good run,” VanDam said. “I was trying to make it five. A lot of these guys have stepped up their game, and that’s what great about this sport.”
Just one year ago, as the 2011 season wrapped and VanDam collected his fourth consecutive and seventh AOY trophy, Chapman was in a low spot in his career. He had to struggle for a 2012 Bassmaster Classic qualification. He got in at 27th place, saving the day through a 23rd-place finish at the season finale on Wheeler Lake.
At that point, Chapman said, he knew he had to make some changes. He resolved to become more organized, to anticipate needs, to act more quickly to take care of details that had distracted him from fishing. He began an exercise and sports therapy regimen that he says has made him the fittest he’s been in his life. His approaching 40th birthday in July added to his motivation to not settle for anything but the best he could do.
And the reinvented Chapman began to win tournaments. His first of 2012 came at the Open level in the Bass Pro Shops Bassmaster Central Open on Lake Lewisville, Texas, in February. His second win was at the Elite level on Toledo Bend Reservoir out of Many, La., in June. In between, Chapman achieved three more Top 12s, and only once failed to make the first cut.
Where will he keep his newest trophy?
“Right up on my desk, next to the other two trophies of the year,” he said.
Chapman made the Top 12 cut to return Sunday to Oneida Lake for a run at the event title —- and another $100,000. Even with the crown secured, he was up for it.
“I look forward to the day, I’m just going fishing,” he said.
A reporter pointed out he was about 4 pounds behind the leader, his buddy Randy Howell.
“I gotta root for Randy,” Chapman smiled. “I am going to do everything in my power to help him win this thing. But if I go catch a 20-pound bag, who knows what could happen?”
Posted by IBASSIN.COM at 7:37 AM