This year the FLW Cup is being held at the spotted bass capital of the world, Lake Lanier in Georgia. Spotted bass love the deep, fresh water during the humid summer. This translates to anglers hunting for deep brush piles teaming with bass. To catch them takes small worms or jigs. The western technique of doodling became entrenched with eastern anglers on this lake. Now, drop shotting is king. All predictions indicate that the winner will have a few deep water areas that will produce solid, consistent limits of spotted bass. Well, that might not be true.

Jacob Wheeler, who has lead both day 1 and 2 of this Cup is fishing shallow. Surprisingly, second place angler, Jay Yelas is also fishing shallow largemouths. One angler is a fluke, having the top two anglers doing the same thing is a winning strategy. It seems that as of Day 2, only Scott Martin is fishing exclusively for spotted bass.


This strategy of bucking the local school of thought is reminisce of Tommy Biffle's quest for the Bass Master Classic. On south east impoundments known for off-shore crankbaiting, Tommy had several Classic Championships slip through his fingers. As the pack cranked the bottom, Tommy pointed his boat far up river and flipped and pitched his Lunker Lure jig to wood. Actually, Jay Yelas won the 2002 Classic on Lay Lake fishing shore line cover as his rivals fished transitional summer time patterns. 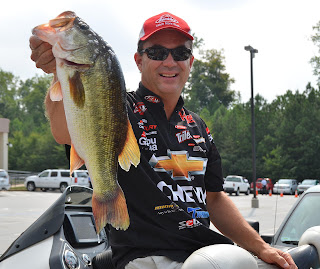 Will history repeat itself? Will Wheeler and Yelas wash out like Biffle did when water levels ruined his best areas? Or, will bucking the system pay off? Wait and see.
Posted by IBASSIN.COM at 12:46 AM