By Pete Robbins
(BASS Press Release)
DETROIT — Jason Christie of Park Hill, Okla., claimed that his status as a non-local enabled him to stay focused and win this week’s Northern Open on Michigan’s bountiful Lake St. Clair, but he’s hoping to have a local advantage when he fishes the 2013 Bassmaster Classic on Oklahoma’s Grand Lake, the body of water where many consider him a prohibitive favorite.
Christie slammed the door shut today with 22 pounds, 13 ounces, to beat a field studded with Tour-level stars and a cadre of top local sticks. It was his third straight bag heavier than 21 pounds, and it will enable him to fulfill a lifelong dream.
“No. 1, you dream about fishing any Classic,” he said. “But to get to fish a Classic on your home lake is a dream come true.”
Besides his Classic berth, Christie won a fully rigged Nitro Z-9 bass boat with a Mercury OptiMax 250.
He said that his advantage over the many St. Clair regulars was that he didn’t have many decisions to make. He found one key area in the mouth of the Detroit River with patchy
vegetation and decided to grind out the tournament in a limited range. “They were probably debating what spot they needed to be on,” he said of his fellow competitors. “I didn’t have that problem. I had no desire to go anywhere else.” 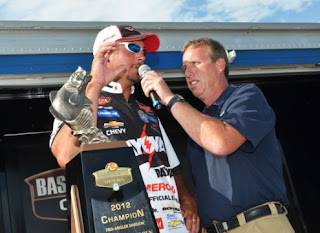 He credited his HydroWave unit for firing up the schools of smallmouths and used his Power-Poles to slow down his drift. His primary baits were a green pumpkin Yum Tube and a Carolina rigged Yum Salleemander in the same color.
“This is where you come to test your equipment, and my equipment did good,” he said.
The Oklahoman’s dream to fish the Classic began early in life, when he’d “get up early and watch professional wrestling and bass fishing on TV.” Unfortunately for the Northern Open field this week, he decided that he’d rather pursue a path as the next Rick Clunn rather than as the next Hulk Hogan. He said his lanky build wasn’t suited for the wrestling ring, anyway: “I would have gotten in the ring and tried to outrun them.” Perhaps Rick Clunn isn’t the right role model for Christie to emulate; if all goes according to plan, he’d like to be the next Boyd Duckett, the only Classic contender to ever claim the crown in his home state.
Second-place finisher Brian Ward of Chesterfield, Mich., was the only angler other than Christie to weigh in more than 20 pounds each tournament day this week. He was remarkably consistent, with limits that weighed 21-14, 22-1 and 21-10.
“All I wanted to do was be steady,” Ward said. He achieved that goal, but ultimately fell short of Christie’s winning weight by nearly 2 pounds. Andrew Upshaw of Hemphill, Texas, who fished the 2012 Bassmaster Classic on the Red River, was the third angler to bring in more than 21 pounds today, and finished third, nearly 4 pounds behind Christie.
A dejected Brian Metry, who led on the first day and the second, suffered mechanical problems today, which cost him several hours of valuable fishing time. Perhaps more importantly, after securing a loaner boat, he was left without his waypoints and forced to scramble to put together a limit that was decent by conventional standards but not nearly enough to maintain his lead. After weighing in 23-5 and 22-0 the first two days, he could only bring in 17-0 today and fell three places. Metry, of Grosse Pointe Farms, Mich., burned two different Jack-It Products crankbaits all week to elicit reaction strikes.
Eric Klotz of Bowling Green, Ohio, weighed in 14 pounds, 3 ounces of smallmouth behind Ward today to claim the co-angler title and its accompanying prize of a Skeeter ZX 190 bass boat with a Yamaha VZ150. Unless Klotz comes home bearing gifts, the victor may be in the proverbial doghouse.
“I’m missing my brother-in-law’s wedding to be here today,” he said. “And my wife is in it.”
Mike Kiester of Davisburg, Mich., who took second place in the tournament on the co-angler side, won co-angler Carhartt Big Bass honors for his 6-2 bass. Mark Modrak of China, Mich., won the Carhartt Big Bass award on the pro side, also with a 6-2 fish.
The third and final Bassmaster Northern Open will take place Aug. 16-18 on Cayuga Lake in Seneca Falls, N.Y. It will be the final chance for many of this group of anglers to punch their ticket to the 2013 Classic. Most of them won’t get to sleep in their own bed at Grand Lake like Christie will, but they’d certainly welcome the opportunity to stay in an Oklahoma hotel rather than watching it online as a spectator.
Posted by IBASSIN.COM at 5:11 AM